Ilott satisfied with P2 in Bahrain as title goes to final weekend!

Ilott satisfied with P2 in Bahrain as title goes to final weekend!

Ilott takes F2 title fight down to the wire

Callum Ilott has taken the Formula 2 title fight to the final round in Sakhir, after finishing second in Bahrain’s Feature Race today.

His title rival, Mick Schumacher, needed to finish the weekend with a 49 point advantage to take the title.

However, the points from pole position and second place today mean that Ilott has cut Schumacher’s lead to just 12 points.

Speaking to Rachel Brookes after the race, the British driver said: “The first stint wasn’t the best but the hards were amazing. For us it’s great points and a good position for tomorrow.”

After taking pole in yesterday’s qualifying session, the British driver lost the lead to Felipe Drugovich on Lap 1.

The alternative strategy meant that he began to suffer on his medium tyres early on and was passed by the ART of Marcus Armstrong on Lap 8.

He then fell into the clutches of Schumacher, who on the hard tyres, was able to slide past him into third.

On this, Ilott said: “I think a combination of trying to stay to close to him and that killed my tyres. The prime tyre cars overtook me.

“I kind of let them past because it’s better to not fight at this point. […] Part of me just wants to send it straight in, but I can’t do that! It’s better to just wait and see what happens really.”

An issue with his front left tyre jamming during his pit stop on Lap 13 cost precious seconds and resulted in him coming out in 17th place.

After Drugovich pitted on Lap 18, he came out just ahead of the British driver. However, the cold tyres on the MP Motorsport and a lock up meant that Ilott was able to overtake him.

After Schumacher pitted, the UNI-Virtuosi assumed the race lead before being passed once again by a surging Drugovich.

The Ferrari Academy driver was able to manage his tyres to hold on to second , whilst Jehan Daruvala held off Schumacher for third.

The 2020 Formula 2 Championship will go all the way to the final weekend, regardless of what happens in the Sprint Race tomorrow.

Callum Ilott will be hoping he can keep up the momentum tomorrow and close the gap to the championship lead; as the outer layout circuit at Sakhir next weekend will provide a new challenge for all the drivers.

Will Callum Ilott be able to close in on Mick Schumacher tomorrow? 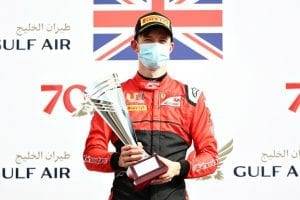