In-form Yuki Tsunoda claimed second ahead of the experienced Luca Ghiotto. The session was brought to an early halt by Mick Schumacher, who hit the wall at Ascari.

Christian Lundgaard setting a blistering time of 1.32.296 to go top early on before Schumacher and Juri Vips went quicker.

Schumacher continued his good pace as the German squeaked into P1 with Jehan Daruvala up to third.

Schumacher failed to improve on his second run and dropped down the order, losing out to Tsunoda and Ghiotto.

Soon after, Lundgaard set a strong lap following his recent struggles, before Ilott pulled it out of the bag.

After scoring just one point last weekend in Belgium, Ilott set a superb lap to move to provisional pole.

And he would keep pole as Schumacher tried too hard to improve, losing the rear of his PREMA into Ascari. The crash brought out the red flag and the session was not restarted, giving Ilott a fourth pole of the season.

Lundgaard was fourth fastest ahead of Nissany who had his best Formula 2 qualifying of his career with Mazepin moving up to sixth ahead of the disgruntled Schumacher.

Daruvala hung onto eighth place ahead of Louis Deletraz and Ticktum claimed tenth. Championship leader Shwartzman struggled, managing only P16, one place ahead of Guanyu Zhou.

Ilott will be delighted with his performance, showing the rest of the field he isn’t ready to move over in the title battle. The UNI-Virtuosi star is in a brilliant position to retake the championship lead on Saturday during the Feature Race.

Head over to our dedicated race page to see all the latest news, timesheets and standings – Round 8 – Monza 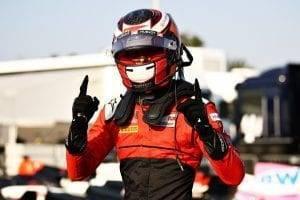