Ilott walks on water to take pole in Hungary

Ilott walks on water to take pole in Hungary

Luca Ghiotto will start on the front row of the grid for the first time since last year’s weekend at Hungary.

A wet track caused Formula 3’s qualifying to be cancelled, giving the 22 Formula 2 drivers even more pressure to perfect their laps in less than ideal conditions.

The biggest challenge was warming their tyres and staying out of the barriers.

With further rain expected later on the session looked set to be a case of ‘first come first served’ for track position with Carlin’s Yuki Tsunoda not wasting any time in setting his hot lap.

First to hit trouble in the wet conditions was Campos’s Guilherme Samaia who spun on a damp patch at the entry to Turn 4, stalling his Campos in the process and bringing out an early red flag.

After a short break to recover Samaia’s beached car qualifying recommenced, with Ghiotto leading the charge out of the pit lane.

Further back Marino Sato and Tsunoda went wheel to wheel in combat, the Trident driver pushing the Carlin driver into the run-off area at Turn 2.

Nikita Mazepin also demonstrated how difficult the conditions were after spinning off at Turn 7. Luckily the Russian driver kept it out of the gravel trap and recovered on the grass, narrowly missing the pack.

ART’s Christian Lundgaard came extremely close to beating the Italian’s time with the Dane setting a 1.52.418 – just 0.006 seconds off Ghiotto.

Lundgaard got his lap spot on the second time around, setting a time of 1.51.729 – over six tenths ahead of the Italian to put him on provisional pole position.

Last year’s Sprint Race winner Mick Schumacher went one better and produced a storming lap of 1.51.584 – over a tenth faster than the Dane to snatch provisional pole.

Ghiotto struck back with a 1.51.075 – over three-tenths faster than DAMS driver, Dan Ticktum, who produced a sensational lap. Putting himself second.

Virtuosi’s Ilott broke into the 1.50s with a time of 1.50.767 – putting himself on provisional pole with just under eight minutes left in the session.

Ghiotto was held up in the pit lane as he waited for his fresh rain tyres. The wheel nut proving difficult, as his Hitech mechanics ferociously attempted to secure it.

Nobuharu Matsushita’s disappointing weekend worsened, with a spin at Turn 7.

Whilst countryman Sato’s wild weekend saw him have yet another spin at Turn 12, losing him vital time.

Jehan Daruvala’s qualifying session ended early with a spin at Turn 10. He beached his Campos and became the second driver to take an early bath as the red flags made a second appearance.

With only four minutes left of the Formula 2 Feature Race qualifying session, the decision was made not to restart, giving Ilott pole position ahead of Ghiotto.

It was another good quali session. Third one in the top three now.

That one clean lap was my best one. We got the timing right as a team – very good job.

Second is still a good result. A big improvement after last weeks’s race in the wet.

We’ll see how tomorrow is if it’s wet or dry. Let’s try to finally get some points.

Virtuosi teammate Guanyu Zhou classified in third place. While, Ticktum, Schumacher and Lundgaard rounded off the top six. Schumacher was positive after the session,

I think that we will be competitive tomorrow – no matter if it’s raining or dry.

Marcus Armstrong and Jack Aitken will start on the fourth row of the grid tomorrow. With, Sean Gelael and Giuliano Alesi completing the top 10.

Championship leader Robert Shwartzman could only manage 11th ahead of Delétraz in 12th, stating,

It’s disappointing to begin the weekend this way. There were many yellow flags that disrupted the lap. When we went out with the fresh tyres the red flag came out so we could not improve.

In Hungary it’s very difficult to overtake, but I hope we will be able to fight back.

Felipe Drugovich starts the Formula 2 Feature Race in 18th ahead of the two Trident cars of Sato and Nissany.

Matsushita was the last of the drivers to set a time. 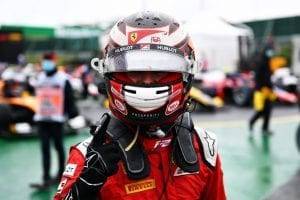