Callum Ilott retook the championship lead in Monza and has now taken the Formula 2 Sprint Race win as well.

A post-race disqualification for Dan Ticktum, after being unable to provide the necessary 0.8kg fuel sample required, has meant that the UNI-Virtuosi driver inherits the victory.

Starting third on the grid after his stellar recovery drive in the Feature Race yesterday, Ilott got a solid start and held on to his position off the line. He then duelled with Louis Delétraz for second, before sweeping past him on Lap 12.

Speaking about the early laps of the race, he said: “I tried to manage the pace quite early on to Louis, but then Dan and Louis pushed quite hard at the beginning. Then Mick was putting me under quite a bit of pressure, so I used a bit more of the tyres than I really wanted to after that stage.“

“We held off at the end, and in the middle I did have good pace. Especially over Louis at that time. I was waiting for the right moment, for him to make a little mistake, and then I went past.”

Ilott was given a few moments respite as Delétraz was caught by the charging ART of Christian Lundgaard. After dispatching the Charouz, Lundgaard began to close the gap to Ilott.

A couple of laps later the Virtual Safety Car was triggered, as a result of Felipe Drugovich’s spin.

On the restart, Ilott’s focus was on his mirrors as he had to defend from Lundgaard behind. Eventually, the UNI-Virtuosi driver crossed the chequered flag 4 seconds behind initial race winner Dan Ticktum.

Regarding his performance this weekend, Ilott said: “Almost a solid weekend, without yesterday, but these things happen. It’s good to be back into the lead, and we’ll see what we can do.” 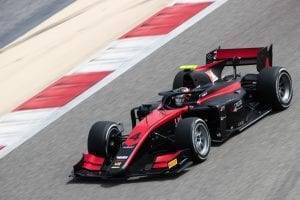