In The Picture: Stoffel Vandoorne

In The Picture: Stoffel Vandoorne

We take a look at Stoffel Vandoorne and his progression and subsequent drop out of F1, for now.

In 2015 Vandoorne had taken what is still considered the most dominant victory in the GP2 Series as a McLaren junior driver.

We take a picture from the past and give it some context and If you enjoy these please do share on social media and let us know your thoughts.

Despite the format changes in GP2 and now the FIA Formula 2 Championship over the last couple of decadesÂ  it still stands out as a masterclass in the championship victory.

That season Vandoorne racing with ART would eventually win the title with four races to spare, claiming an unbelievable 341.5 points which proved some, 160 points ahead of second-placed, Alexander Rossi.

Vandoorne seemed to be winning like every weekend in the Series from what I personally can recall. He would actually win in seven rounds, finish second six times, and third three times making that a podium standing at sixteen of the twenty-one races (76% of all races on the podium, so not far off what I recall).

Putting that into perspective and with rough math for points scoring differences he had taken more points and podium finishes than the likes of Lewis Hamilton, Nico Rosberg, Nico Hulkenberg, and Pastor Maldonado, All of whom when on their way to F1 had been lauded as exceptional junior champions.

This also came in a year after finishing second as a rookie in the GP2 championship, thus showing the wave of momentum he was carrying on his way to both the championship and onto the F1 grid.

The only question mark when we look back there may have been an argument that he faced a weaker field than that seen in later or prior championship seasons, but let us not look past the series containing the above mentioned Rossi, Alex Lynn, Arthur Pic, and future F1 drivers Pierre Gasly, Rio Haryanto, Sergey Sirotkin, and Nicholas Latifi. The points tally alone showed his pace and consistency even as he sailed away in the series.

There was, however, a slight hurdle for the promising McLaren junior driver despite his seemingly un-stoppable charge to the top.

At the time despite the well-publicised performance issues with the honda power-unit, the team had two World Champions in Jenson Button and Fernando Alonso. Alonso had played with the idea of taking a sabbatical while McLaren sorted things out but that never materialised and Vandoorne would have to wait a year.

He would go on that season to get one drive for the F1 team at Bahrain that year as Alonso was unable to drive following the memorable shunt in Australia. Vandoorne out-qualified Jenson Button in the other McLaren, and took the team’s first point of the season with a P10. Notably, going on to be the first reserve driver to score points on his debut since Sebastian Vettel in 2007. To again cement the feeling that he was the real deal.

He would spend the rest of 2016 as a test/reserve driver and compete in the Japanese Super Formula for a Honda team, Dandelion Racing.

In Super Formula he finished fourth which may not seem great but he was the highest of the Honda engined drivers for the season with a couple of wins and a pole position at the Fuji Speedway. Japanese driver, Tomoki Nojiri was his teammate and by comparison, would claim only one-third place finish for the season and ninth in the championship.

Former F1 drivers Kamui Kobayashi, Kazuki Nakajima, Narain Karthikeyan and Andre Lotterer also competed in the series that year, with only the latter finishing above Vandoorne.

As 2017 came around and a race-seat became available with departing World Champion Jensen Button handing up his F1 gloves after a decade and a half in the sport.

For most the measuring stick for a driver is his teammate, and for Vandoorne that would be quite the benchmark considering that his teammate would be double World Champion, Fernando Alonso, who still today post-retirement, is considered the best driver in the world. For his latter years during Mclarens troubles, it was believed that Alonso was out driving his poor McLaren every single weekend.

So looking at Vandoorne in 2017, he would go on to tally only thirteen points in one of the worst McLaren cars in living memory, but if we use the above teammate comparison as a metric, he only finished four points behind the majestic Alonso.

There was however a strange air that he had not done well despite that, maybe he was a victim of his own success. There had been some dreamers thinking that Stoffel may be the next Hamilton and drag the under-powered car up the grid but with Honda’s power-unit at his and teammate Alonso’s disposal that would never have been the case.

Maybe, Also, due to the double World Champion’s ego and/or aura and respect in the paddock, he didn’t or maybe wasn’t allowed to receive the plaudits he deserved for coming so close. When you actually reflect on the season it wasnâ€™t until the last couple of races that Alonso actually moved ahead of Vandoorne.

2017 perceptions aside, Mclaren now had fresh hopes for the new season, having been resigned quite early on to write off 2017 at the back of the grid. The team had bitten the bullet and decided to call off their works engine deal with Honda and move to Renault as a customer in an effort to move forward.

Despite all the expected progress through the winter, the Woking-based team didnt make much more progress in 2018, as they continued to trail considerably behind the top teams and had only really moved slightly closer towards the midfield.

Significantly though for Vandoorne, the veteran Alonso finished the season with fifty points and Vandoorne some 38 points behind. To compound matters, Vandoorne was out-qualified 21 and 0 for the entire season which may have had the biggest bearing on Vandoorne losing his seat for 2019.

And it didn’t get any better on Sunday’s either, Vandoornes average finishing position in 2018 has been 12th compared to his teammate Alonsos 9th. It was then later announced that Vandoorne would not be offered a 2019 seat and with the departure of Alonso, Mclaren would look to a whole new pairing in Carlos Sainz Jr and new F2 star Lando Norris.

Despite Alonso at the time speaking highly of his teammate, calling him one of the best talents in F1. He really didn’t show any of the mastery that we had seen from him in the junior formulas.

Reflecting on his time with Mclaren, it is clear that he dropped into the F1 seat at the wrong time in the famous team’s history. His two seasons racing had been at the end of relations with Honda and with a brand new car and engine as he drove the Renault powered Mclaren. This wouldn’t have offered him much consistency to build on what was a solid start in F1.

Should we also consider Alonso’s past with Renault and seeming influence in the team, the first being such a powerful relationship with the team where he won his two World Championships and the second being the well-publicized control Alonso likes to have on the team? Could there have been an argument that Vandoorne received less support and guidance as Mclaren rallied around the Spaniard?

Either way, it didn’t work out for Stoffel in his time in F1, and Mclaren’s outlook has been positive in 2019, but the question remains. Could and should he get another chance in Formula One?

In recent times there are only two drivers that have dominated Formula Two, that being Stoffel Vandoorne and Charles Leclerc, one of which is considered a nailed on World Champion while Stoffel seems to have relinquished that opportunity.

Vandoorne now 27 years old, may have missed his chance in an ever-younger F1 grid but with his performances inÂ Formula E while being a Development Driver for the Mercedes AMG F1 Team, could he get a final shot at fulfilling the potential the world thought he had? 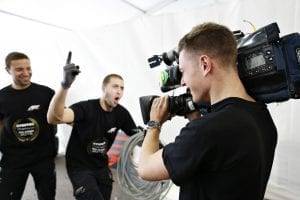