Felipe Drugovich has been crowned the 2022 FIA Formula 2 Champion after the Monza Sprint Race, becoming the first MP Motorsport driver to win in F2 and the first Brazilian to win the second tier of motorsport since Bruno Junqueira in 2000.

After dominating for most of the season, finishing second in the Spa Feature Race, and winning the Feature Race in Zandvoort, it seemed inevitable that the 22-year-old would leave Monza as the F2 Champion.

In the end, Felipe would seal the title in bizarre circumstances, making contact with Amaury Cordeel on Lap 1, forcing him to retire with a broken suspension.

From there on in, the Brazilian waited along with the rest of the paddock to see if he would clinch the title, or if he would be forced to wait another day. When Théo Pourchaire, who had been fighting up the order in the hope of delaying the inevitable, was forced onto the gravel and slipped to the back of the field, the Championship was all but over.

‘At the beginning I was a little bit nervous because Théo was making up some positions, but at the end we figured out [that I would win]. The feeling was unreal, I think I’m going to really enjoy this for a long time.

Felipe made his F2 debut for MP Motorsport in 2020, and was reunited with the Dutch team for this season after spending a year with UNI-Virtuosi in 2021. After the Sprint Race, the new Champion paid tribute to his team:

“They really helped me at the beginning to develop my driving and my skills, but they’re also a very young team. I think because of that I had to also help them learn a lot. That’s also what helped us to win this year. I helped them to progress and they also made a big step forward from last year.”

Drugovich has led the Championship ever since his immaculate double-win in Barcelona, but his victory this season was not straightforward as he carried the pressure of title favourite:

“Throughout the month of July, we felt we lost a bit of performance and we were losing that lead in the Championship… it’s never nice to see the others improving, but at the same time I think that was something that needed to happen so we could work in the summer break and come back stronger.

“Going into Spa there was quite a lot of pressure, I had to deliver; Théo was quite close in the Championship and we did it, especially in Quali and in the races as well. In Zandvoort it was probably the one where I had the most pressure. It’s a very good track to qualify on but not to race on so I had a lot of pressure on the [Feature Race] start.”

Felipe has shown remarkable consistency throughout this season, and has very rarely faltered. During weekends where others seemed faster, he kept it clean and still managed to gain points, and only once has he finished outside the top 10 this year.

He has looked like the complete driver, but by his own admission, only now has he developed that title-winning consistency:

“Last year I wasn’t completely ready, especially mentally. I think I struggled a little bit in the tough moments, I only wanted to win all the time and lost a lot of points because of that, and I think that really helped me to be ready now. I feel like a totally different driver – a lot, lot better.”

After the Sprint Race, MP Motorsport lead the Teams’ Championship by just six points from ART Grand Prix, and Drugovich’s attention will now turn on helping the team to their first Team’s title in F2.

He will need to make some overtakes to score from P12 on the grid during the Feature Race, and will have a final chance to make the difference in the last round of the season in Abu Dhabi in two months’ time. 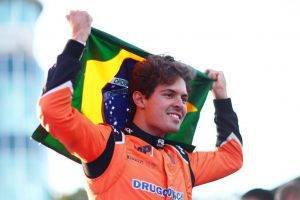