The Feature Race winner Felipe Drugovich gave a damning assessment of the second restart in Race 2 at Zandvoort which saw a heavy collision in the midfield.

Multiple cars retired including Alpine Academy member Jack Doohan who was in contention for victory. The race leader Liam Lawson waited until the pit straight to get back to racing speed which caused a concertina effect further down the field.

The New Zealander’s approach to the restart differed from Drugovich who led during the opening safety car period. Drugovich chose to bolt just before the banked final turn and everyone dealt with the restart without any contact.

MP Motorsport driver Drugovich said while speaking to the media at the press conference: “By regulations, if you accelerate you shouldn’t brake again, just one go.

“So it’s kind of an elastic effect to it so I have to check it properly but for sure it wasn’t the safest restart.”

Red Bull Junior Ayumu Iwasa drove to third place and his fifth podium of the season for DAMS. The Japanese driver explained that he didn’t know the limit of the soft tyres at the start of the race and the track felt similar to earlier in the weekend.

“My feelings are really similar to Richard’s. Yesterday’s grip was quite similar and tyre potential was similar to the hards.

“So I didn’t know exactly the soft potential at the beginning of the stint so that was quite difficult to decide when we should pit. But overall it was really similar to yesterday so it was not so difficult.”

Despite the Feature Race starting much earlier in the day than Saturday’s Sprint Race, the track yielded similar amounts of grip over the two races.

Drugovich said: “No it was actually quite similar maybe the wind there was a little bit less wind but with the temperature, we know how to compensate.

A little bit of balance we need to change but to be fair it was quite similar maybe a bit quicker as well but no massive difference.”

Richard Verschoor finished in a superb second place at his home event and shed light on how much of an effect graining and marbles had on his result when speaking to the media in the press conference.

The 21-year-old said: “There were a lot much more [marbles] than I expected from F3 I think so it was not really an issue.

“But if you go offline there was definitely less grip that’s what I had in the out lap because in the out lap I think the tyres were quite cold and then I grained the front left a tiny bit but in general the track conditions were similar to yesterday.” 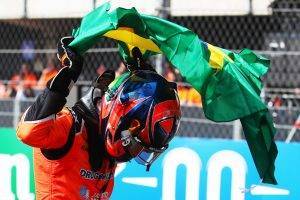