Iwasa Excited Ahead of Baku

Iwasa Excited Ahead of Baku

Before this season, the DAMS driver had never raced on a street circuit in five previous years in the junior series. Yet at the Jeddah Corniche Circuit, the second round of F2 this season, Iwasa qualified sixth and finished P6 and P7 in the two races to take home nine points.

However, he endured a much tougher weekend at the next street circuit in Monaco. He did not yield to double-waved yellow flags in Qualifying, losing a lap that would have been good enough for third overall and earning an additional ten-place grid drop for the Sprint Race. He then crashed out of the Feature Race on the final lap while battling for tenth with Trident’s Calan Williams.

After practicing the Baku circuit on the simulator, Iwasa believes the venue will offer him an excellent opportunity to bounce back and move up from 13th place in the drivers’ championship.

“I am really excited for the Baku weekend because after training on the simulator I feel that the track is good for me. Baku has a lot of 90-degree corners, slow corners. I have good confidence for low-speed driving, so this is quite positive,” Iwasa said.

“Baku is a street circuit but quite different to Monaco, 90-degree corners and at the side of the track is the barrier or wall, but we can still have a little bit of margin to push to the maximum. That is also positive for us rookie drivers.

“I am interested to see the track, so maybe in the Free Practice, I will be a bit cautious and lap time will improve.

“I need to adjust my driving for the car because there are very high speed straights, then heavy braking. I need to get the maximum potential from the tyre – that is the main point.”

Iwasa and the other 11 first-time visitors to Baku can take comfort in the fact that a rookie driver has won at least one race there every year bar 2019. Last season, Jüri Vips took back-to-back victories at Baku in his first full season in Formula 2.

“I have never been here before, so I will concentrate on the driving and finding the limits of the track and the car in Free Practice and put it all together in Qualifying. That’s my aim,” Iwasa said about his hopes for Friday’s running.

“I am very excited. Everything is positive, and considering the season so far, I still need to get the results. I have even had the potential to win races, but it hasn’t happened yet. We have done a lot of good preparation, so now I will try and win.” 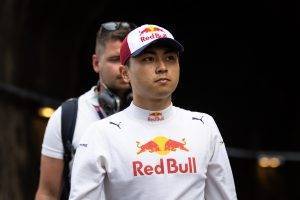