Iwasa: “From the beginning of this week, I had quite good speed” After taking pole position

Iwasa: “From the beginning of this week, I had quite good speed” After taking pole position

Ayumu Iwasa explained he had blistering pace from the start of the weekend in Abu Dhabi as he took a superb pole position for DAMS.

The Japanese driver bested his team mate Roy Nissany in qualifying as DAMS secured a front row lockout during the final round of the season.

Théo Pourchaire drove to third place in for ART in an ultra-competitive session that saw the top three separated by less than a tenth of a second.

Iwasa said: “I’m quite happy about this session. I was working quite a lot with the team during the break, and I could show our potential at the end of the season.

“I think that’s the biggest point. Already from the beginning of this week, I had quite good speed, I just had to adjust my driving for the softs in Qualifying.

“I was not doing well during Qualifying, but I guess like at the Hungaroring, I could do a good lap.

“I think this kind of situation is the biggest improvement in my driving so I need to improve it in the future, but anyway I’m really happy with this result because Roy is P2, so I think almost perfect for us and DAMS.”

Tyre management on the Yas Marina Circuit has become notoriously difficult, despite qualifying being held at twilight.

Iwasa admitted he toiled in practice with tyre management but managed his Pirelli tyres well when it counted in qualifying.

“I was starting to have a feeling for the tyre management in Free Practice, because I was struggling with this.

“For sure Abu Dhabi is really hot, so I needed to be careful not to get overheating on the tyres. I think in Qualifying I could manage it quite well.

“I think my management was good, but the car was especially quite good to get a good lap in at the end.

Dutchman Richard Verschoor qualified tenth for Trident, the 21-year-old will begin Race 1 from pole with Red Bull Junior Liam Lawson in second on the grid. 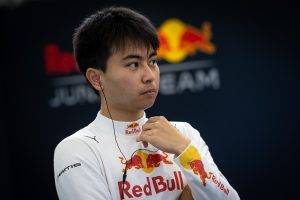