Ayumu Iwasa is still focused on improving his driving, even after winning the final Feature Race of the FIA Formula 2 Championship in Abu Dhabi. Iwasa started on pole position, and survived late pressure from F2 Champion Felipe Drugovich to take his second Feature Race win of the season.

Speaking to F2 media after the Feature Race, the Japanese driver said: “I had so much pressure from Felipe. The pace wasn’t so great, and I didn’t have enough speed to make a gap, so I think we need to look at the data and see what we can improve.”

Iwasa held the net race lead from start to finish, emerging in P1 after everyone made their pit stops. But the race was far more complicated than it might have seemed, with Drugovich breathing down his neck for most of the race. At one point, Felipe got so close he locked up, and came inches away from rear-ending his rival.

Despite the pressure, the young driver never faltered. He said: “It was really tough, it was big pressure, because Felipe is the F2 Champion! But I had good confidence in keeping the position. Even though I was struggling a lot, I felt I could defend well, and was trying to have good tyres towards the end of the race, and I think they were working well at the end.”

The DAMS driver has shown plenty of talent during his first season in F2, and has ended the season fifth in the Drivers’ Championship. With none of the top four expected to return to Formula 2 next season, Iwasa could be the highest returning driver in 2023.

Just minutes after standing on the top step of the podium in Abu Dhabi, Ayumu was already looking ahead to next year, and said: “I’m really happy about the team improvement [this season] and my improvement as well. I want to focus on next year to do better; this year I couldn’t put it all together.

“I have quite a lot of improvement to make on my driving performance. I need to look back at my performance and then I’ll focus on next year.”

The Red Bull Junior driver will hope that the team bosses in F1 took note of his performance and relentless attitude, and will want to carry this form into next season. In a highly competitive young driver programme, a strong year in 2023 would be needed if he is to have a chance of securing a coveted F1 seat with Alpha Tauri. 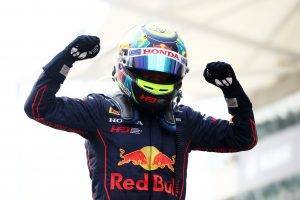