Amid rumours of his replacement for the upcoming Sakhir Grand Prix, the Mercedes team announced on Wednesday morning Formula 2 Graduate, George Russell, would be his stand in.

Nobody was more surprised to get a call from Williams to fill Russell’s seat than F2’s very own, Jack Aitken.

He explained he’d felt a ride of emotions after waking Tuesday morning and seeing the Hamilton news.

“I knew Stoffel’s position. I head whispers Tuesday night from the team. They said: ‘Sit tight. We’re looking at all the options.’”

It was Wednesday morning when he received the good news of his promotion.

The young Brit expressed his sympathies to Hamilton and wished Russell well on his opportunity with Mercedes through his Instagram account. Adding he’d been prepared all year in case his services were required by the team at any point.

“I’m extremely excited to be making my Formula 1 debut with Williams this weekend.”

Being a member of the Williams Driver Academy, Aitken has one testing session under his belt from the Styrian Grand Prix in Austria.

Five months have passed since then and the Formula 1 season is in its final stages before the winter break.

Aitken spoke about the ‘domino effect’ this week’s circumstances have triggered:

“We’ve chatted a fair bit. It’s a great chance for him [Russell] as well. Even my F2 seat has given the next driver [Ralph Boschung] an opportunity.”

The British/Korean driver returned to his roots regarding his race number, choosing #89 which was the number he had on his first kart. It feels aptly sentimental to add it to his first Formula 1 car.

Within hours of the announcement shenanigans were afoot at Williams…

Aitken has a close connection with Russell, having been teammates at Art Grand Prix in the 2017 GP3 series, and the 2018 Formula 2 campaign, that saw Russell win both Championships.

“He [George] has been helpful about the car this weekend.”

Aitken appears calm and relaxed and if you’ve been following him on social media in recent times you’ll see he enjoys a few jovialities. This weekend is no different…

Aitken’s first Practice session of the weekend went well. He finished in P20, only 2.6s behind Russell, who topped the timing sheets on his first drive for Mercedes.

While more experienced drivers spun and wrestled with the track, Aitken finished the second Practice session in 19th place, ahead of Ferrari’s, Charles Leclerc.

Although it was the final position on the timing sheets it was still a respectable 1.6s off quickest driver, Max Verstappen.

As the sun set over the Bahraini desert on Saturday, the Qualifying session lit up the night sky with track spotlights and glowing sparks from the supreme machines.

Jack’s success story continued as he Qualified in an impressive P18, ahead of Haas reserve driver Pietro Fittipaldi, and the 2008 World Champion, Kimi Räikkönen!!

A valiant effort from both drivers but not enough to get through to Q2 today sadly.

“I don’t think our relative speed will change that much. There’s a real opportunity this weekend. We could get some points.”

“We’re more than capable of being involved in the fight in the midfield. That’s my main aim for now.”

Regarding observations of how calm Aitken has appeared this last couple of days, his jokey response to Sky Sports reporter, Natalie Pinkham, was:

“I might have a panic attack at any moment.”

Race day arrived and Aitken gained another track position before the start of the race with Lando Norris incurring a grid penalty for changing his engine.

Starting in P17 Aitken had made it to P15 by the time the Safety Car came out, following a first lap incident involving Verstappen, Sergio Perez and Leclerc.

He dropped a place on the restart but held position for 20 laps until Norris pitted for new tyres – hopping back up to P15.

As pit stops unfolded he made it up to P12 before falling back to 16th after his stop on Lap 33.

With Nicholas Latifi retiring in his Williams, Aitken jumped back up to P15.

On Lap 62 Aitken lost the car on the final corner and was lucky to save it. Unfortunately, he tapped the very end of the orange barriers, knocking his front wing off in the process.

Pitting for a replacement, he emerged in last place.

Aitken heroically managed to finish his first Formula 1 race in P16 ahead of Haas reserve driver and fellow debutant, Fittipaldi.

Well, that was crazy!

On such a crazy night of racing, I really saw a chance for us tonight, and pushing hard for that bit me badly. A massive apology to the guys and girls @WilliamsRacing, who have been nothing short of legends for my debut weekend. pic.twitter.com/21GgNXPLVJ

This weekend has seen Aitken compete and finish his first Formula 1 Grand Prix.

He should feel incredibly proud of his performance.

After just two days of being thrown in at deep-end, with arguably one of the most talented grids Formula 1 has seen for years, Aitken has more than impressed the paddock and race fans worldwide.

“It’s going to be a fun weekend for all involved!” He stated just a few days ago.

It certainly was, Jack. 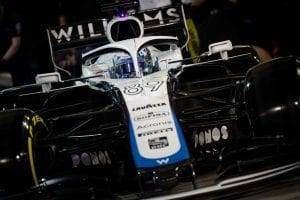