Jack Doohan: ‘Cool’ to Get Trophy from Father

Jack Doohan: ‘Cool’ to Get Trophy from Father

Virtuosi Racing’s Jack Doohan had the surprise of a lifetime – and a moment he’ll cherish forever – when his father, five-time motorcycling world champion Mick Doohan, presented him with the third-place trophy in Saturday afternoon’s FIA Formula 2 Championship Sprint Race at the Red Bull Ring.

Doohan came under pressure from Felipe Drugovich early in the race, but the championship leader’s attack faded after a Virtual Safety Car period on Lap 12 for the stopped car of Liam Lawson.

Later in the race, Doohan hunted down Théo Pourchaire for second, but he was not close enough to pass on the ART Grand Prix driver, who was, in turn, pursuing Hitech Grand Prix’s Marcus Armstrong for the lead.

Pourchaire had been investigated for exceeding track limits four times, and a time penalty for the Frenchman would have promoted Doohan to second.

However, the stewards took no further action on the matter after discovering that one of Pourchaire’s track limits violations was recorded erroneously.

On the podium, Formula 1 race winners Mark Webber and David Coulthard handed the trophies to Armstrong and Pourchaire, respectively. When it was Mick Doohan’s turn to present the trophy to Jack, father and son laughed and hugged, soaking in the moment of serendipity.

InsideF2 asked the Virtuosi driver in the post-race press conference whether he knew that his father would be awarding the prize.

“I had no clue, to be honest!” Doohan said. “I thought he just didn’t care about my Sprint Race, and to be honest, I didn’t blame him because he probably thought, ‘Sprint Race, it’s alright’.

“Then I saw him upstairs, and I had no idea what he was doing up there, but I saw DC and Mark as well, and when we walked out, I saw that he was standing next to the podium.

“I thought he was going to present the trophy, but not to me. But it ended up being so, and he got to congratulate me. It was cool, to be honest.”

Doohan, now sixth in the standings on 63 points, will start tomorrow’s Feature Race from sixth place, having qualified less than two-tenths of a second off pole-sitter Frederik Vesti. 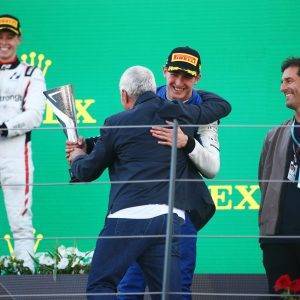