Jake Hughes secures his seat with Van Amersfoort, as the Dutch team take their first steps into FIA Formula 2.

It seemed a given the Brit would sign for VAR this season, after impressing team boss, Frits Van Amersfoort, over the three day test in Abu Dhabi, in December.

“The times were promising, and relying on Jake’s expertise, it was a very positive, and a very good day.” – Frits Van Amersfoort.

Hughes notably featured on the timing sheets in ninth place, and 13th on day one of the test, and in seventh and eighth, on the second day – which highlights exactly what both man and machine are capable of:

“I’m overly excited to be racing with VAR in 2022. During the post-season test at Abu-Dhabi it became clear to me that VAR takes this new challenge extremely serious. We are very much on the same level when it comes to vision and drive for success, making it a very pleasant environment to work in.”

Hughes drove for HWA Racelab in 2020 and 2021, and it is the HWA team that VAR has taken the F2 reigns from as HWA bow out of Formula 2. Hughes stated:

“I’m just very thankful to the team for putting their trust in me and providing the opportunity to work together.”

Hughes won the BRDC Formula 4 Championship in 2013, and more recently finished second to Raoul Hyman, in the 2018 F3 Asian series, driving for Hitech. The Briton won every race he participated in and was just two points short of the Championship trophy.

VAR are the current Teams’ champions in Italian Formula 4 and ADAC Formula 4, with Ollie Bearman winning both driver championship titles.

VAR’s CEO,  Rob Niessink, is confident in the new Formula 2 car, and Hughes, as Van Amersfoort prepare to make their mark on the Formula One feeder series:

“It is exciting to be able to make this first FIA F2 driver announcement!

“We are extremely happy with Jake joining us for the FIA F2 Championship. We are standing on the brink of a great adventure for which we very much welcome the experience and maturity that Jake brings along. During the post-season test at the Yas Marina Circuit in Abu Dhabi, Jake showed to be a highly motivated and professional team player. Jake’s accurate input and feedback already made an impact during testing, which helped the team to progress already in a very short time. His drive and dedication match ours, giving us great confidence for the season ahead!”

Driving for HWA in the 2019 and 2020 Formula 3 series, Hughes got his first taste of Formula 2 when he was promoted into Giuliano Alesi’s seat for the 2020 Sochi Feature Race and Sprint Race.

With a P4 in the 2021 F2 season for HWA and eight podiums in F3, it’s perhaps a natural choice for VAR to test Hughes’ abilities in their maiden year:

“The F2 car is incredible to drive, and I look very much forward to compete in it for the full season. It will be a long and tough stretch, but I am eager to kick off the season soon in Bahrain!” 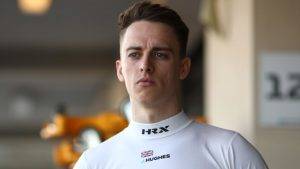