The 16-year-old joins the Daventry team for the events at Silverstone and Brands Hatch as Fortec return to Britain’s Formula 4 series.

Higgins enjoyed a meteoric rise through the karting ranks and made his car racing debut at the end of 2020 in the Ginetta Junior Championship.

The British driver is aiming for a full British F4 campaign in 2023 and is delighted to join Fortec for the remainder of this season: “I’m really pleased to be joining the ROKiT British F4 grid, and with such a renowned team as Fortec Motorsport,” said Higgins.

“I’ve been fortunate enough to test the car on a number of occasions with the team throughout this year, but there’s no substitute for competitive experience.

“The ambition is to be back on the grid full-time for 2023, so to get a head start going into the winter is only a benefit to me.

“I’ve gelled really well with the team, and they have such a proven track record for developing drivers.

“Silverstone is such a fantastic track, and Brands Hatch is a personal favourite of mine with all the elevation changes, so the ingredients are there for us to learn a lot and have some fun.”

Fortec’s Team Manager Oliver Dutton welcomed Higgins to the outfit and is eagerly anticipating his team’s return to British F4.

“James is a driver with real promise, so it’s fantastic to welcome him formally to the team.

“We’ve made a lot of progress with him as a driver during testing, so I’m excited to see it all come together in a racing environment,” explains Dutton.

“These last two events are as much a learning exercise for 2023 for us as a team, as well as James as a driver.

“So, there’s a shared objective there, and the aim is just to gather as much experience and information as possible to make sure we’re hitting the ground running over the winter and into next year.” 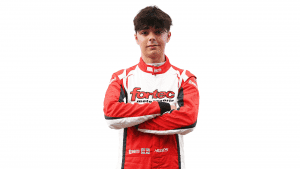