The FIA Formula 2 Feature Race in Jeddah was overshadowed by an accident involving Théo Pourchaire and Enzo Fittipaldi, after the Frenchman stalled at the race start.

The FIA released the following statement:

At the time of writing we await further news concerning the wellbeing of both drivers.

The incident at the race start brought out the red flags, further delaying the race which had been pushed back as barriers were repaired at the start. A race of 20 minutes plus one lap eventually started, eating into F1’s time slot.

A spin into the barriers for Olli Caldwell which also collected Guilherme Samaia led to another red flag, after which the race was not resumed.

Although the final classification has not yet been released, it is believed that Oscar Piastri was the eventual race winner, from Robert Shwartzman in P2 and Ralph Boschung claiming his first podium in Formula 2, with half points being awarded.

This would also mean that Prema will be crowned 2021 FIA Formula 2 Team Champions, with both of their drivers now occupying the top two spots in the championship.

Full points could not be attributed as an insufficient race distance was completed, meaning that the title fight will be decided at the next round of the FIA Formula 2 Championship in Abu Dhabi.

As the sun set on the Jeddah circuit, there was drama even before the F2 cars appeared, with a delay to repair some barriers on the exit of turn 13 through to turn 15.

After a brief scare when the words ‘session aborted’ appeared on the TV screen, the green light appeared on the pit lane for the drivers to do their reconnaissance lap, this time in the right direction.

Clement Novalak was left stalled on the grid, forcing him to start from the pit lane. This added to his disappointment after he impressed to qualify in P12 on his F2 debut, but was given a three-place grid drop following

Oscar Piastri started well and moved across to cover off his team mate to retain P1 going into the first corner, while the race-stopping accident happened behind.

The red flags brought an end to proceedings, while everyone’s attention focused on the safety and wellbeing of Pourchaire and Fittipaldi.

As more time passed, the prospect of getting a full-length F2 race seemed less and less likely, although this paled into insignificance in comparison to the immediate concern for the safety of Pourchaire and Fittipaldi.

Plans to resume racing were announced, with the restart just two minutes before the planned time of the F1 drivers’ parade, meaning that the F1 race would be pushed back.

After such delays, a race of just 20 minutes plus one lap was announced, with all cars that were not already on the super soft tyres being fitted with the softest available rubber, with the mandatory pit stop remaining, to be taken after 4 laps.

This reduction in race distance meant that no more than half points could be attributed, removing any possibility of Piastri taking the title before the final round in Abu Dhabi.

The race got underway for the second time with a rolling start, ensuring that a repeat of the Lap 1 incident would not be possible.

Piastri took a wide line through the final corner before launching and weaving down the main straight to break any tow been given to his team mate. He quickly built a one-second lead at the front from his closest title rival.

Drivers were able to push flat-out with very little consideration for their tyres which would not have to suffer for many laps.

After retaining P3 at the restart, Ralph Boschung came under pressure from Guanyu Zhou, the Chinese driver forced to slide wide into the run-off as Boschung defended the final podium place.

Olli Caldwell lost the rear of his Campos and found the barriers, also collecting Guilherme Samaia, with both drivers appearing to be uninjured, but disappointed with what was not the first incident of the weekend for either driver.

The safety car was brought out, sending many drivers diving into the pits, before the red flags reappeared once again, shortly followed by a notice that the race would not be resumed .

The final finishing order remained unclear with results usually taken from two laps prior to a red flag.

With the team battle most likely decided, we await to see the conclusion of the drivers’ championship fight. In the meantime however, we await further news concerning the condition of Théo Pourchaire and Enzo Fittipaldi. 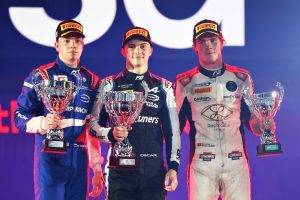