Richard Verschoor has said that he was left “physically drained” after taking P2 in Jeddah’s Feature Race. The Dutchman, who lined up on the front row of the grid behind eventual race winner Felipe Drugovich, held second place on a circuit with a reputation for punishing the drivers’ bodies.

After winning the first race of the season in Bahrain last weekend, the Trident driver managed to convert his pace into his best F2 Qualifying result, setting himself up to capitalise in the all-important Feature Race.

As a result of that strong performance, Richard has leapt up to P3 in the drivers’ standings and will hope to maintain that position.

“At the moment we are doing a good job. In the end, consistency will be key, so we have to keep pushing. I’m looking forward to the challenge.”

Reflecting on the result in the post-race press conference, he said: “At the moment I feel physically drained, but the race was really nice. I was happy to keep up with Felipe.

“They had a quick car and Felipe was really quick around here. For me, as a rookie on this track I think we did a good job, I felt comfortable in the race today.”

Despite his impressive podium, Richard hoped he could have gone one better to challenge the Brazilian in front of him.

“I made a bit of a mistake. I think I started pushing a bit too early and I wasn’t close enough to pass him straight away, then I was too close and lost over a second, and lost DRS. It was not well judged from my side.”

As well as being very physically challenging for the drivers, the Jeddah circuit has also drawn criticism for the amount of risk involved with such high speeds for a street circuit, and Verschoor had concerns about one particular section of the track.

“On Turn 12, the exit kerb, for me, is way too dangerous. They should put a different kerb there, because if you push you can bottom out and have a crash like Mick yesterday.”

Verschoor will now be looking ahead to testing in Barcelona, and then to the next round of F2 racing in Imola, a home race for his Italian Trident team. 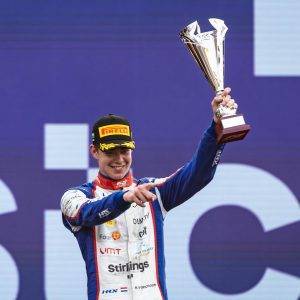