In the past ten years India’s motorsport scene has grown massively,  from having two drivers on the F1 grid, an Indian owned F1 team in Force India as well as in Formula E with Mahindra Racing and it’s very own Grand Prix from 2011-2013 held at the Buddh International circuit.

Keen to follow in his countrymen’s footsteps is twenty-one year old Jehan Daruvala from Mumbai whose rise has been spectacular.
_
He’s got his first big break when he won Force India’s One from a billion hunt beating former Trident driver Arjun Maini, with the pair receivingÂ backing to race in Europe.
_
Seven years later and fresh from knee surgery and finishing third to PREMA teammates Robert Shwartzman and Marcus Armstrong  in the Formula 3 championship, Daruvala arrives in Formula 2 with Carlin Motorsport as well as the backing of the prestigious Red Bull junior team.
_
I sat down with Jehan over the phone with the Indian back in the UK after getting an evacuation flight from India in the wake of the COVID-19 pandemic which has affected the world.
_

Where have you been based during quarantine?

The first two months I was back home in Bombay and after the provisional announcement that the season would start sometime in July.

I decided to come back to England. So, I got on an evacuation flight about three to four weeks ago and I’ve been in the UK since then.

How has your contact been with Carlin over lockdown?

Not too much, we’ve been in touch over preparations for the season, but we’ve been all waiting for when the season is going to start.

I actually went back to Carlin a few days ago to do a COVID test which came back negative which was really good and now we are going to start preparing for the start of the season which is in a month’s time.

Thoughts about the season ahead?

I think it’s going to be quite mixed, obviously, there is going to be plenty of good drivers, I think my aim is going to be pretty similar to last year in F3 which is to be consistently at the front, to get points finishes and hopefully will be fighting for the World Championship like last year.

I think the package is going to be good enough. We saw through testing that the car was really good so yes I can’t wait to get going.

Do you remember your first victory? Do you recall when and where it was and the emotions you felt?

Yes, I remember my first victory it was in New Zealand and it was a mixed-race and I hadn’t won a Formula race up until then, we were all on slicks and I decided to make the call to pit for wets and through all the commotion I overtook sixteen cars on slicks in the last two laps and I managed to win.

There were a lot of mixed emotions from there and I just couldnâ€™t be happier because I didn’t win in my first season of single-seaters to get the win early into my second meant a lot to me.

I think the biggest thing to learn in racing is that there are lots of ups and downs in racing, mostly downs, it’s a type of sport where winning isn’t easy.

You have to accept the defeats and just to learn from them if you don’t learn from those mistakes you will never get better so I’ve kind of learnt that and hopefully through more years of development I hope to get better as a driver.

What role does music play in your preparations for racing?

To be honest, I’ve never really been a fan of music, I donâ€™t mind putting on any song on a playlist on Spotify, I am not really into any particular type of music, I definitely don’t like rap but every other type of music I am ok with.

The testing went very smooth it was my first time in an F2 car so it took me a couple of sessions to adapt but as soon as I got going it felt like any other racing car you push it to the limit and you got to know the differences.

I think the main difference would be the turbo which is in Formula 2 and not Formula 3, that was the biggest difference to get used to and the car’s a bit heavier there is a bit more downforce so you can push the limit more.

Was it a worry that your deal with Carlin came late and what is it like being backed by Red Bull considering their rich history of promoting young talent into F1 and the fact there could be an Alpha Tauri seat up for grabs?

It feels really good to be honest cause I had a really good season last year but I wasn’t a part of any driver academy, so it meant the world to me when Red Bull approached me to be part of the young driver’s academy.

It’s a great opportunity for me now I am in Formula 2, I just can’t wait to get going, last year I had a knee injury which set me back but yes I am just really excited that the calendar’s official and we are going to be racing in a month’s time.

How’s your relationship with your team mate Yuki Tsunoda?

I didn’t really know him before this season too much, I met him briefly in the paddock but we got on really well at the test, he’s a nice guy were both part of the Red Bull junior team so it’s important that we get along with each other and learn off each other and move forward.

Do you feel under pressure to win the championship in your rookie season considering that there could be an Alpha Tauri seat up for grabs?

Yes, there’s always the pressure that always comes with being part of a big team but my focus is not to think about the year after but like I’ve done in the past couple of years is to focus on the now.

Which track are you most looking forward to racing on this season?

What would it mean for you to become the third Indian Formula 1 driver?

It would mean the world to me, because I’ve been karting for the past ten years and we’ve had two Indians in Formula 1 before me, so I am focusing on the present and if I do make it to Formula 1 it would be dream come true.

In a high quality field stacked with the cream of junior racing’s talent,  Daruvala should be a major contender to take the championship when the season kicks off on the 4th July at the Red Bull Ring in Spielberg, Austria.

Thank you to Jehan and Carlin for the time, we look forward to seeing everyone back on track soon. 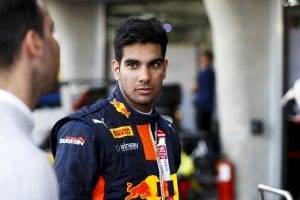