Juan Manuel Correa is Ready for New Challenges in Formula 2

Juan Manuel Correa is Ready for New Challenges in Formula 2

Juan Manuel Correa makes a comeback to FIA Formula 2 after his disastrous incident in Spa-Francorchamps in 2019.  He claims he is ready for new adventures and challenges within the competition.

The American driver raced in FIA Formula 2 for the first time back at the Yas Marina in Abu Dhabi for the Sprint Race on November 19, 2022

“It was very tough but very exciting, especially for me. It means a lot to be back here, to do an actual race, and to be back in the championship is something I’ve been working for in the last three years of my life.” said Correa.

Correa returned to his old roots with Van Amersfoort Racing, counting with Amaury Cordeel as a teammate.

During the Qualifying session on Friday, Correa positioned himself in 17th, gaining two positions during the Sprint Race on Saturday and wound up in 15th place.

Despite the glory of his comeback, this weekend was not the first time Correa was back in a FIA Formula 2 car since the accident, because he had tested for Charouz last year. The driver felt rather positive sharing his experience when it comes to racing competitively in F2

“I think race-craft wise I did a very good job, I’ve always been good at that” admits Correa “the pace in the race was good, I had a bit too much degradation on the second half but overall positive”

Furthermore, the driver couldn’t stop sharing his gratefulness to be back

“I was looking for somebody to do this race with, and VAR was the most exciting option for me, and here I am! I’m very excited to be with them” Correa also stated he feels connected to the team “I feel like we’re on the same wavelength because I’m also very hungry to be back in this category. They are benefitting from my experience, and I’m benefitting from their expertise”

Correa is set to compete tomorrow for the first Feature Race since 2019, and despite feeling confident and positive, he is aware of how demanding these races are.

“It will be a long race, it will be physical. We’ll see, I think as a team we have to make a couple of changes, and think more about the long-run performance of the car. Honestly, I think if we fix the issues we had today, and we get a good strategy and good pit stop, we could be scoring points”

With a lot of determination, Correa’s goals are clear and he admits he’s ready for new challenges in FIA Formula 2.

“My goal is to be in the points,” said Correa. 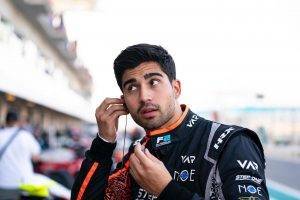