Liam Lawson celebrated making a “step forward” at the ninth round of the FIA Formula 2 Championship as he won Saturday’s Sprint Race, his first since the second round in Jeddah nearly four months ago.

Speaking during the post-Sprint Race press conference, the Carlin driver explained what it meant to take his third Formula 2 victory after a disappointing season so far in terms of results:

“We had a great start to the season with three podiums, and it’s been difficult since then. Obviously Sunday is the day we want to be achieving these wins, but it’s definitely a step forward. Considering the Qualifying, we had to make the most of today.”

The Red Bull Junior and Test Driver only managed to qualify in P9 but showed strong pace in the Sprint Race, as he attacked the drivers ahead. That pace was key for Liam after he made a slow start and lost a place to his compatriot Marcus Armstrong:

“[I thought] ‘Oh my god another bad start’, honestly, because I’ve had a few of them. It was pretty frustrating but straight away from the start I felt at least equal [on pace] with the guys in front, if not a bit better.”

That pace was clear to see as he managed to pull himself onto the top step of the podium, with two spectacular late moves around the outside into the Nord Chicane, as he demonstrated his confidence on the brakes.

The first of those moves came against Armstrong, a driver that Lawson knows well:

“I’ve known him for a few years, even back from racing in New Zealand, so I know how he is. You go to attack, and then at the last second, he does this big swerve. You have to expect it, and he did again today, but I think he struggled on the brakes.

“He left me just enough space, we maybe rubbed or were very very close… [it was] really aggressive but it was nice and fair.”

The Kiwi then repeated that move to snatch the race lead from Jehan Daruvala. The pair made contact but managed to get through relatively unscathed.

From there, Lawson looked strong and pulled out a lead as the drivers behind engaged in a late scuffle for the podium positions.

Liam will hope to repeat the pace he showed in the Sprint Race as he tries to move through the field in the Feature Race, which he will start in P9. After the Sprint Race, he set out his targets for the rest of the weekend:

“First things first, I need to sort my start. If I can get a good start, the start’s the easiest opportunity you have the whole race to make up positions – if you have a perfect start, you can easily jump an entire row, if not more.

“From there, I think we showed today that overtaking is possible for us. So, if the speed’s there again, which I hope it is, then we can also potentially make some moves in the race. I’d like to be in the top five, if not higher.” 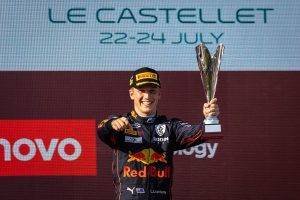