Liam Lawson stormed to a maiden Formula 2 victory on his debut in Bahrain, after holding off Carlin’s Jehan Daruvala in the first Sprint Race.

Hitech’s Liam Lawson won in Bahrain after keeping Daruvala behind for the second half of the race, despite him reporting that his tyres were falling off on Lap 17.

Just 0.8s separated to the Red Bull juniors at the chequered flag. Both were congratulated by the head of Red Bull’s driver programme, Dr Helmut Marko, before the podium ceremony.

Lawson and Daruvala both put in a strong claim for a Formula One seat in 2022.

Behind the Red Bull pair was another rookie, David Beckmann. The Charouz driver started second on the grid but like many, struggled with tyres towards the middle phase of the race.

For his first race, Beckmann put in an impressive performance and managed to hold off the likes of PREMA’s Robert Shwartzman and Oscar Piastri, to take third on his Formula 2 debut.

After starting 11th on the grid due to a problem in qualifying, Shwartzman managed to claim fourth at the flag. PREMA had a good race for both drivers, despite almost coming together on Lap 1.

Piastri will hope to have better starts in the future, after starting third and dropping a few places throughout the first lap.

It was expected that the likes of Shwartzman, Daruvala and Lundgaard would progress through the field. Since they are now in their second season of F2, they have an advantage with their level of understanding of the tyres.

It was obvious that the rookies at the front were struggling with tyre degradation, but due to the heat and nature of the track, it was only a matter of time before all drivers were facing the same issues.

Despite starting on reverse pole for the first race of this season, Théo Pourchaire didn’t take home any points.

Until Lap 13, the youngest driver on the grid was holding second and driving an impressive race. Unfortunately for him, his ART started to lose power, forcing him to pull over to the side of the track and retire from the race.

As a potential championship contender, he will no doubt be disappointed. Not only does it affect his result for Sprint Race 1, but it also means he will start towards the back of the grid in Sprint Race 2 this afternoon.

Whilst trying to overtake Guanyu Zhou into Turn 1,  Ticktum went too deep into the corner and spun MP Motorsport’s Richard Verschoor ahead.

Behind them, Drugovich ran into the back Ticktum and damaged his front wing in the process. After being forced to pit, he finished down in 16th.

As for Verschoor, after running in the points until the incident on Lap 2, the Dutchman retired from the race due to damage from the contact, whilst Ticktum received a five second penalty for the collision, which dropped him down the eighth in the overall order.

Starting on pole for the second Sprint Race of the day will be Hitech’s Juri Vips. Vips made an impressive recovery from 22nd on the grid to 10th, after being disqualified for a technical infringement in qualifying.

Alongside him will be MP’s Lirim Zendeli, who also picked up two points for the fastest lap in the first Sprint Race. 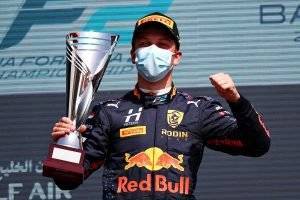