Qualifying in his first FIA Formula 2 pole position, Liam Lawson has stressed how critically important it is to survive this weekend’s Baku street circuit in his quest for glory.

The New Zealand rookie’s approach is to get through tomorrow’s first Sprint Race unscathed as he starts P10 in the newly formatted reverse grid.

As the car got lighter and the track got better in today’s Qualifying session, the Kiwi driver pushed hard, and a little bit more on the limit, through the middle Castle section.

“I feel pretty good. I haven’t had a pole position in such a long time.”

With it’s fast, long straight, the overtaking opportunities are for the taking at the Azerbaijan track. But it’s tight and twisting streets make it accident prone, with only 13 cars finishing in the 2019 Feature Race and Sprint Race respectively.

From midfield the New Zealander wants to maximise his points and stay out of trouble as best he can in Sprint Race 1.

He’s mindful of any accidents and his initial focus is on the loss of brake temperature, that could make frantic restarts, ‘quite sketchy’ if incidents occur.

After briefly touching on Sunday’s Feature Race, stating he will have a, ‘nice clear track’ ahead of him, his focus is clearly on tomorrow, which will prove more difficult to win.

Between today’s two sessions, the Hitech driver worked hard with the team, learning from teammate, Jüri Vips’, who was quickest in Free Practice, and lines up next to him on the grid in Sunday’s Feature Race.

“Jüri did a mega-lap and I have him to thank for his data.”

“I think he learned a lot from me.”

Tomorrow, Vips has the advantage of being one place ahead of Lawson in P9.

However, this track is highly regarded by the drivers for being able to overtake and win from lower down the grid.

Could Lawson take the top step after earning his first pole position in Formula 2? 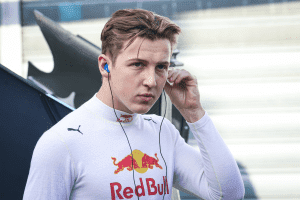