Lawson Has ‘No Doubt’ He Can Return to Form in Baku

Lawson Has ‘No Doubt’ He Can Return to Form in Baku

Carlin driver Liam Lawson believes he has the speed to fight for top positions at Baku, the sixth round of this season’s FIA Formula 2 Championship.

Lawson, a Red Bull junior, has endured a stretch of difficult race weekends. After taking three podiums, including the Sprint Race win in Jeddah, from the opening three races, Lawson has picked up only four points in the seven F2 races since.

Lawson took his first and thus far only F2 pole position at Baku last year. After retiring from the first Sprint Race because of an opening-lap collision, he fought from the rear of the field to seventh in the second Sprint Race.

Sunday’s Feature Race didn’t go to plan, however, as he lost a chance of victory when he earned a 10-second penalty for an overly ambitious defensive move on Théo Pourchaire at the start of the race. Lawson finished the race sixth, 26 seconds behind eventual winner Jüri Vips, his team mate at Hitech at the time.

Speaking ahead of this year’s event, Lawson emphasized that the Baku City Circuit, located in the heart of the Azerbaijani capital, poses a singular challenge to drivers because of its unusual characteristics.

“It is a street circuit, but it is quite unique. We reach our highest speed at this track, but it doesn’t have high speed corners. [It has] a lot of 90-degree corners, big braking zones, so it’s really heavy on the brakes. Then Sector 2 is very, very twisty through the castle section, so it’s a very unique circuit, less bumpy than Monaco.”

“It’s [a] very long lap, so in Qualifying, for example, to put the complete lap together, it’s a little bit more tricky than most tracks because you have so many corners to get right. It’s very easy, obviously, to make small mistakes, and there is a lot of time in those big braking zones to put it all together in a nearly two-minute lap.”

Though Lawson has slipped to eighth in the championship with 38 points, he showed strong pace at Monaco two weeks ago, setting the fastest time in Qualifying before the lap was voided because of a yellow flag infringement. He thinks he can maintain that level of performance at Baku, where his Carlin team scored points with both cars in each of the three races last year.

“Judging on how the year has gone so far, speed-wise I have no doubt we will be up there,” Lawson said. “The car’s been good all year. We should be right there, but obviously, we’ve been in the wars a little bit, so [we’re] hoping to strike some luck this weekend.” 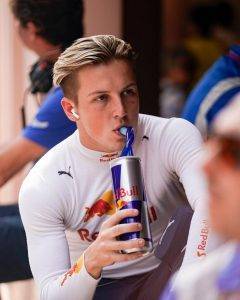