Lawson: “It’s frustrating to have such good pace and come away with so little points”

Lawson: “It’s frustrating to have such good pace and come away with so little points”

Liam Lawson was disappointed with how the weekend played out in Budapest. The Carlin driver revealed that he missed out on the chance to secure more points, despite finishing inside the points-paying position in both races.

Lawson didn’t start the tenth round of the season as well as he would have hoped, having qualified outside the top 10 since Austria, leaving the Kiwi to feel the same way other drivers would react to the “complicated” session.

In an exclusive interview with Inside F2 after the Feature Race, Lawson still recalled the disappointing Qualifying he had around the Hungarian track: “We had a tough Qualifying. The speeds were actually really good in Free Practice, so it was a bit frustrating.

“Run one, and Qualifying wasn’t horrendous either. I think it was just that run two didn’t have the greatest tire warm-up.”

Lawson had an incredible recovery drive in the Sprint Race to finish sixth, battling PREMA’s Jehan Daruvala and compatriot Marcus Armstrong to earn six points. The Red Bull Junior did his best to finish seventh in the Feature Race, but it wasn’t enough to call it a good weekend with only nine points earned.

Luck hasn’t always been on his side, especially with the unpredictable Hungarian weather that gave teams and drivers somewhat of a headache.

Lawson stated: “I didn’t put the lap together, and that was the result basically, but the races, so it’s frustrating to have such good pace and come away with so little points.

“Yesterday Sprint Race, we were absolutely rapid, especially at the ends and today as well just unfortunately probably we chose the wrong strategy.

“We thought it was going to rain, and then it never did. We decided to go primes, try and go long and wait for that rain, but it never came, and then when I came out of the box, it was just unlikely. I got jumped by like seven cars, just not as many points as I would’ve liked.

“I think we definitely could have had more. The pace in the race has been great also for the car. Obviously, we had a nice sprint race, but we’re here.”

With 90 points, Lawson is in eighth place in the Drivers’ Championship, just 10 points behind Enzo Fittipaldi, who moved up to fourth place after two podium finishes over the weekend.

Lawson is hopeful that the triple-header and Abu Dhabi could go much better than in recent rounds, with only two race victories to his name, which is less than he expected at the start of the campaign.

He added, “I’m getting sick of overtaking cars. I want to be starting in the front and just using the pace that we have and being front because I think we can do it.

“That’s the goal for the next couple of races. I have a few weeks off now just to reset, relax, and then obviously, we have a triple header coming up for another break.” 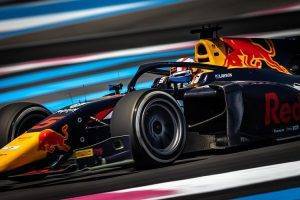