Liam Lawson joins forces with the Carlin team for the upcoming FIA 2022 season, with a clear focus on his future.

Following a year with Hitech Grand Prix, Lawson’s mixed fortunes in 2021 can only be beneficial to the learning a driver has to do to achieve greatness:

“The second year is always a good step having done a year and learnt a lot, so to take all of that into a new team is a great way to start.”

After the best possible launch to his 2021 campaign by winning the first race of the season in Bahrain, Lawson finished the season ninth with 103 points.

His Sprint Race 2 win on the wet track conditions of Monaco was cruelly taken away because of a technical infringement. But the rookie celebrated two more podiums in Bahrain and Jeddah.

“I’m super excited for the new opportunity this year. The pre-season test went really, really well. It was a completely different experience to what I’ve been used to. The whole team is really focused on the right things and all super motivated going into the season.”

The New Zealander has proved his talent by winning the 2019 Toyota Racing Series with M2 Competition, achieving five race wins, across 15 races. Pipping Marcus Armstrong to the post by 10 points – Both Kiwi drivers dominated the event.

Looking at his track record, Lawson has secured P2 and P3 in many series’ he’s participated in, and narrowly missed out on the 2021 Deutsche Tourenwagen Masters Championship win last season – Finishing just 3 points behind winner, Maximilian Götz.

Trevor Carlin added, “We’re delighted to have Liam join the team.  He is a great talent and we’ve watched him with interest over the last few seasons.  We’re very proud and thankful that Red Bull and Rodin have entrusted us with this next stage in Liam’s career.  Liam did a great job in the post-season official tests in Abu Dhabi and slotted straight into the team.  I expect him to be a championship contender this year.”

With Lawson’s track record, do you agree he can win the Formula 2 Championship this season? 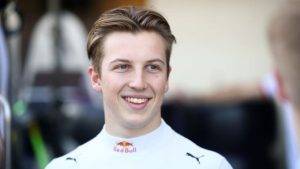