Despite the continued misfortune for Liam Lawson throughout his 2022 FIA Formula 2 season, the Red Bull Junior remains hopeful for the upcoming rounds after some improved luck in Silverstone.

Lawson expressed his encouragement with the way things turned out in the Feature Race in Silverstone by saying: “Overall, I would say it was an OK weekend.

“The speed was very good from the car all weekend. In Qualifying, I didn’t quite put everything together, and that’s on me; we definitely had the car for more.”

The New Zealander finished last in the Sprint Race after sustaining damage when battling in the points and having to pit for repairs.

However, he managed to up his pace for the Feature Race, where he finished in third place. Lawson explained: “In the first race, it was pretty disappointing, [I] had the wing knocked off in an incident – a tiny bit of contact.

“I left plenty of space, but I guess Theo [Pouchaire] understeered out into me and it wasn’t a bad collision but just the perfect angle to take off my wing, so I had to pit. Disappointing”

Nevertheless, the Feature Race in Silverstone brought a great result for Carlin, with Logan Sargeant winning and Lawson coming in third.

Lawson was, understandably, more upbeat about his Sunday: “Then today, had a good start, just missed a bit of speed in the mid part of the race.

“I started to come back a bit, I think, but then had a big lock-up towards the end and had to defend a little bit for  P3, but it was nice to finally put some points on the board.

“It seems like it was the first time I’ve done that properly since Bahrain so it was nice to do that.”

Lawson will have the chance to add more points to his name in the next round in just one week when Formula 2 heads back to Austria after a one-year break. 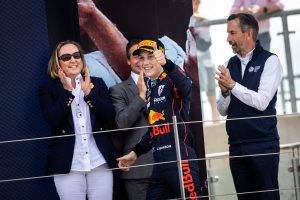