Lawson looks forward to a strong recovery drive in France

Lawson looks forward to a strong recovery drive in France

FIA Formula 2 is heading to Le Castellet, Liam Lawson aims to leave the French track with some positive results.

Last time out at the Red Bull Ring, Liam’s weekend went from bad to worse as he, unfortunately, failed to get off the mark on the Formation Lap, then his Carlin came to a halt outside Turn 3, forcing him to retire from the Sprint Race on Lap 13.

He managed to claim one point in the Feature Race for 10th place when Richard Verschoor and Jehan Daruvala were given out penalties, it was, however, not to his own high standards as a weekend, he slipped to 10th in the championship standings overall.

Moving on to the ninth round of the season, Lawson sees the Paul Ricard circuit as an exciting challenge, which will be his first time driving around the venue in the Formula 2 machinery.

“In Qualifying, it will be quite difficult to put in the perfect lap. It’s quite an exciting track to drive, it will be interesting to see what they do with track limits this weekend as well.”

With rising temperatures and the possibility of plus 33 degrees air temp this weekend, it will be a challenge for the 22-strong grid.

He added, “I think that the degradation in the past has been reasonably high, and especially with the temperatures we are looking at having, it’s going to be quite warm, so that will be a factor.”

Looking at the recent form of his teammate, Logan Sargeant, who’s now the closest driver to Championship leader Felipe Drugovich, Lawson will now look for an upward spike in results to get back in the mix.

“Two weekends now before the break, it will be nice to go into that break with two solid weekends under our belt.”

Follow all the action with InsideF2 from this weekend. 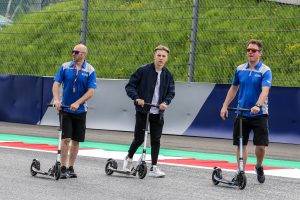