Liam Lawson is clearly on a mission to secure the 2022 FIA Formula 2 Drivers’ Championship.

From fifth on the grid, to first, the New Zealander stood on the top step after navigating through today’s chaotic Sprint Race in Jeddah.

Lawson has set out his stall already, taking second and third on the podium in the first two races in Bahrain.

The race today was no easy feat. With two full Safety Cars and a Virtual Safety Car, the Carlin driver remained patient as the race unfolded in front of him, then when the time came, he pounced:

“Pretty much the whole race was about keeping brake and tyre temp under those Safety Cars, with the crashes that were happening. There were some quite slow Safety Car laps, and in these cars it’s really hard to keep temperatures. We were able to do that. But when we did have the green flags the car was really really fast.”

Lawson was uncertain where he’d finish with being on a different tyre compound to race leader, Jake Hughes. But after the second Safety Car, he realised the win was perhaps a possibility:

“I thought Jake was going to be in a great position because we didn’t have many racing laps. I was able to stay with him in the first couple of laps, and stay within the DRS, and make the pass.”

Not knowing which compound was best, every team and driver took a gamble today:

“It definitely wasn’t clear cut that the medium tyres were the way to go, judging by what happened last year and today. With very few racing laps the softs could have easily worked. And to be honest under that last [Virtual] Safety Car we didn’t have many laps, just seven or eight laps left in the race.

“We’d only done one or two laps pushing at that point, and I thought the softs were the clear choice, but it definitely wasn’t clear until they dropped off a little bit more.”

Lawson’s confident after his P1 today. Tomorrow he starts the Feature Race in P6:

“It’s promising. We need to take this result into tomorrow. Make a few tweaks to the car and grab another good score of points.”

The Kiwi is now leading the Drivers’ Championship:

“It’s always nice to be in front but it’s so early it’s completely irrelevant at the moment, we just take it race by race.

“It’s definitely a good result today, and this weekend with the chaos that goes on in these races, it’s really about surviving, and that was the target today.

“That’s the goal for tomorrow, to just survive, and hopefully be in another good position.” 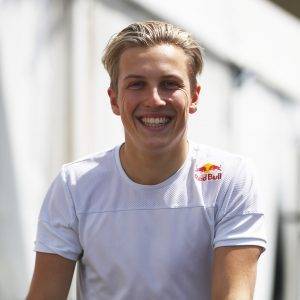