Lawson Ready to Put Points on the Board in Baku

Lawson Ready to Put Points on the Board in Baku

Qualifying second on the grid for Sunday’s FIA Formula 2 Feature Race, Liam Lawson is more than ready to put some points on the board:

“Obviously, a new team for me this year, which I’m happy with. To be honest we’ve had good speed all year, and as I’ve said before, its really about putting some points on the board finally.”

The Red Bull Junior was as surprised with his qualifying time today as former teammate, Jüri Vips, was with his Pole position:

“The first lap, was a decent lap. The next one, I got half way around the lap and going into Turn 15 there was something slippery on the track. I didn’t hear the radio message, but it all sounded very panicky and I didn’t know what was going on.”

Over team radio after the chequered flag, Lawson laughed in relief, saying:

“You scared me. I thought we were done. I saw the smoke. I heard something on the radio… Dude! You scared me.”

After the session, Lawson didn’t feel like he’d put the best lap together, mostly due to the tyres being cold. The New Zealander felt disadvantaged because the Carlin team are at the very back of the pit lane.

“The lap was compromised. I didn’t have the temps, and I never had the confidence starting the lap.”

Regarding the Baku street circuit itself, the Kiwi is full of confidence:

“Being in my second year, it helps if you go to these places because these sort of tracks they’re quite unique to drive. For me it’s nice to know really for Free Practice how to drive the track. It means less of a jump from Qualifying, this weekend.”

Being the tricky, narrow, circuit that it is, where incidents and accidents can happen in an instant, Lawson considered a P2 was still a good result, despite being just two-tenths off Pole sitter Vips’s Qualifying time:

“Finishing the lap I saw a huge improvement from the first one.

“The car was really good today. Knowing now the gap to Pole, it was a little bit disappointing considering the potential we had. But it’s a solid start to the weekend.” 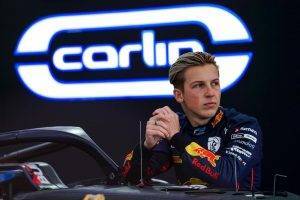