Liam Lawson was left rueing a slow stop during the Feature Race in Spa-Francorchamps, which cost him a chance of double win in Round 11 of the FIA Formula 2 Championship.

The Kiwi driver had a successful weekend, making his first FP1 outing for AlphaTauri on the Friday, winning the Sprint Race on Saturday and then stepping onto the podium again the next morning, but was left wondering what could have been after suffering with a slow pit stop.

Speaking during the post-Feature Race press conference, the Carlin driver looked back on that moment:

“We had a very slow stop, and I thought I was going to come out a lot further back, but the undercut worked really well. Had everything gone perfectly to plan we could have probably fought [Jack Doohan and Liam Lawson] with an undercut, but in the end P3 is a good result.”

Lawson emerged from the pits just ahead of Enzo Fittipaldi, who had already managed to get his new Pirellis up to temperature. The Red Bull Junior narrowly held on despite driving on cold tyres, but was unable to bridge the gap that had opened up to the top two.

He had a tough race against the Brazilian, as the pair came wheel-to-wheel on several occasions during the Feature Race. Fittipaldi twice took to the run-off through Les Combes, eventually giving back the position on both occassions.

At one point, the drivers even made contact as they went two-abreast through Les Combes, barely keeping the cars on the track. That battle, as entertaining as it was for the fans, hindered Lawson in his efforts to move up the order.

Although Liam had a good start from P6 on the grid, he did not manage to make up as many positions as he had hoped:

“I had a really good launch, but I was stuck on the outside into Turn 1. If I’d been able to get across [to the inside] I feel like I would’ve been able to jump a couple of cars, so I was already a little further back than where I wanted to be.”

Considering the up-and-down nature of Lawson’s season so far, the weekend represented a good step forward, as he moved from eighth to fifth in the Driver’s Championship. After the race, he had his sights set on continuing this rich vein of form:

“I’d definitely like to carry this forwards. The Championship’s very far out of reach for us, so I’m just trying to have some good races, and highlights to finish off the year.” 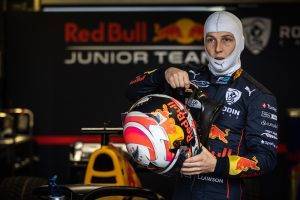