Following a dominating drive in the wet, Liam Lawson wins in Monaco, after inheriting first position at the start of the race.

There was late drama this morning when pole-sitter Marcus Armstrong failed to get his car to the grid. After an incredible overtake on Jehan Daruvala in the last minutes of the first Sprint Race yesterday, the Ferrari Academy driver had to start from the pit lane.

Drivers also had to deal with a lot of standing water on track, following a night of rain in the Principality.

It was Lawson who ultimately inherited P1.  At lights out, drivers did not seem to be phased by the slippery track.

PREMA’s Piastri used the drier side of the grid to overtake Lawson at the start.

Campos driver Gianluca Petecof had an early end to his race when he made contact with Trident’s Marino Sato, and hit the wall at Turn 1. No yellow flag was needed to recover the Brazilian driver’s car due to the incredibly fast work of the Monaco Marshals.

New Zealander Lawson did not give up easily and spent the first few laps trying to regain first place.  His time came on Lap 5, when a late breaking move didn’t stick, but the Kiwi managed to overtake Piastri down the inside at La Rascasse.

Lap 5 also saw Armstrong’s day go from bad to worse with his race ending at Sainte-Dévote.

On Lap 10, Sato went off deep into Turn 1, ending his race and bringing out the Virtual Safety Car to neutralise the race.

UNI-Virtuosi took a gamble and double-stacked their drivers Guanyu Zhou and Felipe Drugovich, switching to the supersofts. Their gamble didn’t seem to pay off as both drivers were a lap down five laps later and Zhou pitted again for wets.

Ticktum made a brave move on Lap 15, which saw him overtaking Aussie driver Piastri, coming out of the tunnel for second position.

Alpine Academy driver Christian Lundgaard was our fourth retiree after locking up into Mirabeau and making contact with the wall, he was unable to get his ART Grand Prix car back on track.

Lap 20 saw Red Bull Junior Lawson and Carlin driver Ticktum leave Piastri behind and give a thrilling show for the battle of the lead, with the Kiwi’s team asking him to ‘keep it tidy’.

There was another exhilarating battle behind the leaders which saw yesterday’s podium sitter, Roy Nissany, hit the wall, resulting in his retirement from the race.

A full Safety Car was brought out in the final five laps after Trident’s Bent Viscaal tried to make a move on Charouz’s David Beckmann – it ended in the German retiring.

The restart saw Lawson pull a 3s gap between him and Ticktum who was struggling with his tyres. The Hitech driver held his position after a dominating race to take first place in Monaco!

It’s the driver’s second win in F2, and has added 15 points to his tally for the championship.

Ticktum took second place on the podium after his brave efforts, and  Piastri took third place for PREMA – his second podium in Formula 2.

What a thrilling race around the streets of Monte Carlo!

Let us know your thoughts on the race over on Twitter @F2inside and join in the chat on our Discord. 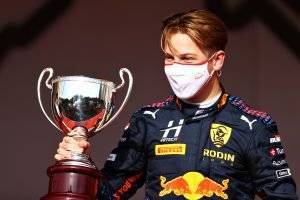