Liam Lawson won his debut race in Formula 2, he finished the weekend second in the points table.

Lawson scampered ahead at the start and spent most of the race in a to-and-fro with former Formula 3 rival Theo Pourchaire.

After his rival retired, Lawson was left with a more experienced rival in Jehan Daruvala. However, the Kiwi managed to pull off a defensive masterclass and pulled off an impressive first win.

Lawson said: “It was a really good start to the season. We didn’t maximise; there are definitely points to improve on and learn from this weekend. In race 2, we were on for a podium, and we gave away a lot; we lost probably 10 points there, so, really, that’s quite disappointing.

“The bounce-back today was nice; we definitely got lucky with the safety car when I was in the box; we made up a few spots.

“The speed we can find. I just have to maximise the race-style of driving, I think. Something that I didn’t quite nail this weekend.

“Qualifying was definitely not the maximum; we had a really weird balance shift from the test to this weekend and didn’t quite keep up with it, and so that was a bit of a shame, but in the end, it actually worked out, starting at the front for the first race.

“Our starts were good this weekend, so that’s definitely a positive to take forward.

“I think that it was a weekend full of positives; the first weekend is always going to be a bit of a shock, you are always going to learn a lot, and I definitely did, so I am excited to take forward this experience into the coming races.”

Juri Vips had a disastrous weekend, leaving with zero points despite being up there with Lawson on pace.

He was disqualified from qualifying after his Hitech was found to be in breach of technical regulations. The technical irregularities were found on the floor of the car after Vips qualified fifth.

The Estonian managed to climb up to 10th in the first Sprint Race. This meant he started the second Sprint Race from pole, however, a gearbox problem robbed him of the victory.

The Feature Race saw Vips with a decent race up until the late safety car moved him back down the order.

“We could still have had a very good weekend. In race 1, we went from 22nd to 10th, which wasn’t bad at all. I mean, I didn’t have a great race; I had a big lock-up and a flat spot, but we recovered by the end to P10, which was actually perfect.

“I think we had an easy victory taken away in race 2. And today, from last, we would have finished P3 or 4 without the safety car. The team made some calculations after the race today; we were by far the fastest on track today… yeh…”

“It’s such a shame because I think the car was mega all weekend. It was just that in none of the sessions did things go on our way. So, we walk away with zero points. I think it could easily have been a championship lead.”

Hitech will hope for more luck with Vips and more wins with Lawson when they head to Monaco at the end of May. 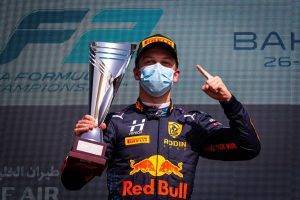