Liam Lawson’s “hectic” lap in the closing stages of the FIA Formula 2 Baku Sprint Race earned him an unlikely podium. After starting in P9, he drove an aggressive race and moved up to third place by the chequered flag.

The second half of the race was punctuated by three safety car periods, bringing about the usual Baku chaos. During the post-Sprint Race press conference, Lawson explained how he moved up the order in the midst of the action:

“I had doorways open up for me over the lap, I kept putting my car in the right position and managed to go from seventh to third in that one lap. It was one of the most hectic laps I’ve ever had in a race car.”

The Carlin driver got his elbows out early on, battling with Jüri Vips on the opening lap, but staying out of trouble.

He swapped positions twice with championship leader Felipe Drugovich before making his final charge through the field and onto the podium.

After a strong Qualifying session on Friday, the Kiwi driver will start Sunday’s Feature Race from the front row of the grid, with a real chance of victory:

“Tomorrow, we’re in a good position; P2 on the grid is nice. I didn’t have the best of starts today, but I know what I need to do to fix that tomorrow.

“With the pace we had today, I think it’s definitely possible to go for the win.”

The final race of the weekend, where the majority of the points are awarded, will be crucial for the Red Bull Junior Team driver as he tries to move up the order in the championship.

After a strong start to the season, retirements and qualifying misfortune have cost him points, but Liam is focused on making up for lost time:

“The confidence has been there all year. It’s pretty frustrating to be in this position but every race we’ve gone to the speed has been really really good.

“We have a lot of points to make up, but if we keep things the way they’re going, I see no reason why we shouldn’t be fighting for these podium positions throughout the rest of the season.” 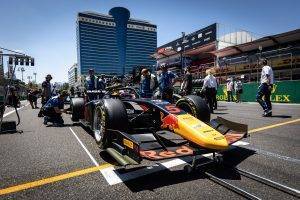