Lewis Hamilton has enjoyed an extremely impressive career in Formula 1, with seven world championships and a record-breaking 98 race victories to his name.

The Briton also had great success before F1 and in 2006 he won the GP2 Series title, during his first and last season in F1’s chief feeder series.

On his way to victory, he produced a brilliant weekend at Round 5 of the campaign in Monaco. It was rounded off in true Hamilton style on the 27th of May 2006, by dominating the Feature Race and taking a giant leap towards his GP2 crown.

Heading into Monaco, Hamilton held second place in the drivers’ standings, two points behind his closet title rival Nelson Piquet Jr, after a mixed start to the year.

The British driver started the season with second and sixth-place finishes at the opening round in Valencia.

After a dip at Imola, the McLaren young driver bounced back in terrific style with a double victory at Nürburgring.

Monaco featured a unique schedule for GP2, as the series held only one race instead of the usual two, due to F1’s hectic undercard being shared by GP2, World Series by Renault and Porsche Supercup.

Hamilton’s Monaco weekend started magnificently, as the ART driver stormed to pole position with a time of 1:20.430, pushing his Dallara-built GP2/05 chassis to its absolute limits on the 2.07 mile circuit.

The time was so brilliant that the Briton’s closet threat, Franck Perera could only muster a 1:20.717, a quarter of a second slower than Hamilton.

An extra reward for the driver’s masterful pole lap were the 2 points awarded to his tally, allowing the ART driver to join Piquet Jr on 39 points at the top of the championship.

At the start of the race, Hamilton was equally brilliant and produced a magnificent start to lead into Sainte Dévote. However, the first metres of the 45-lap event weren’t so good for Tristan Gommendy.

The Frenchman clattered into José María López at Turn 1 and caused carnage at the back of the field, leading a multitude of drivers to retire. This incident also delayed Hamilton’s fellow title contender Piquet Jr.

Surprisingly, there was no Safety Car after the first lap drama due to some incredibly fast work from the marshals. This allowed Lewis Hamilton to build an advantage over the chasing pack.

The ART driver had stunning pace on the day and by Lap 13 when Perera made his pit stop, the Briton enjoyed a comfortable lead.

Hamilton stopped three laps later and rejoined the race in the lead, all the while Perera found himself stuck behind Andreas Zuber in third place, who had yet to stop. The Trident driver eventually pitted on Lap 17, which left the French driver free to attack Hamilton.

During the second stint of the race, the Briton continued to lead in his ART car that looked beautifully balanced on the streets of Monaco.

By Lap 20, the gap between Hamilton and Perera was 5.6 seconds in the British driver’s favour, while Hamilton’s teammate Alexandre Prémat drove in a comfortable third position.

Then on Lap 24, a great battle began to develop for seventh place, with Hiroki Yoshimoto at the head of a long queue of cars.

Michael Ammermüller and Ferdinando Monfardini were involved in the tussle, and at the Nouvelle chicane, Monfardini misjudged his braking point and unfairly gained multiple places. The Italian then pitted at the end of that particular lap.

Over the remaining 21 laps, the gap up front between Hamilton and Perera ebbed and flowed, but the DAMS driver never got within 3 seconds of the race leader. The leading duo looked to be in a class of their own throughout the entire Feature Race, lapping every car up to P6.

As the laps ticked down, Hamilton cruised to victory, finishing with an 8.4 second lead over Perera, who never got close to the British driver throughout the 45 laps.

Prémat claimed a distant P3 in a double podium for ART, while the British driver’s title rival Piquet Jr ended up outside the points.

As it turned out, this dominant Monaco weekend was just a small preview of what was to come for Hamilton. 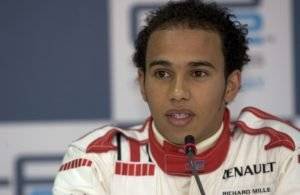