Liam Lawson had an Eventful Monaco

Liam Lawson had an Eventful Monaco

Liam Lawson’s weekend turned into a series of unfortunate events, with disappointing results in both races where he couldn’t maximize his full potential, falling back to eighth in the championship standings, only earning one point from the fourth round of the F2 2022 season.

The weekend started well for him, rounding out the top five from the Free Practice session, as disaster struck him later that evening after setting the fastest time in Qualifying from the first group, despite being one of the fastest drivers from both sessions on Friday.

However, the Kiwi racing driver was found guilty of failing to reduce speed under a single-waved yellow flag. As a result, Lawson‘s best lap time got deleted, and they used his second-best time instead to put him in third, handing the pole position to the championship leader Felipe Drugovich.

In addition, he has received a five-place grid drop, dropping him down to P11 for the Sprint Race, as Lawson opened up about how he feels after the unfair scenario.

“Qualifying was obviously disappointing, the car was very, very good, and we put a very good lap together,” said Lawson.

“Right at the end, I went through a single yellow before the line, but it was so late that I didn’t think….. to me it was safe, so I kept my foot in it across the line.”

Lawson got caught up quickly in a queue behind Charouz Racing’s Enzo Fittipaldi in the Sprint Race. There was no way around the Brazilian driver, which was a missed opportunity, as the penalty impacted his whole plan from the weekend.

“I got a time deleted and a grid penalty, so in Race 1, I started in P11. From there I did what I could, but it was pretty much a train, so finished P8.”

The Red Bull Junior driver’s weekend got worse. His car stalled on the grid even before the lights went out, and he had to start from the pit lane.

He made some brave moves throughout the race, but unfortunately, there was some issue with the car, which marked the fourth retirement from Monaco’s Feature Race that left him dissatisfied.

“Then today in the Feature Race I had the stall and started from the Pit Lane. Then we had a drive issue towards the end, so we had to retire.

“Not a good weekend, especially as we were very, very fast.” 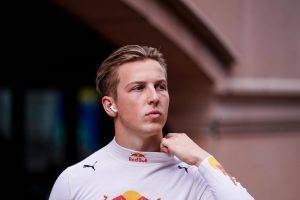