Carlin’s Liam Lawson almost had the perfect weekend in Baku just before disaster hit in the final session around the Azerbaijani capital.

The contact with UNI Virtuosi’s Jack Doohan left him with a puncture that cost him the chance of securing his second win of the season, as he falls to tenth in the championship standings.

Starting off the weekend, the Kiwi has set up an excellent pace in most sessions, only finishing outside the top three once, with a podium earned to his name in the Sprint Race. Despite an eventful and heavily disrupted Free Practice, Lawson secured the second-fastest time from the leaderboard, only narrowly missing out on the pacesetter Juri Vips by 0.077s.

With last year’s promising result, Lawson expected much more from qualifying to repeat the feat, but then his fellow Red Bull Juniors driver Jüri Vips beat him with over five tenths faster than his pole position time last year, which made him feel unpleased with the result provided.

“A really good start to the weekend. Qualifying went nicely for us,” said Lawson.

“The car was really fast. We actually had the speed for Pole, but it was a very messy end to the session, and we were at the back of the pit lane as well, so warm-up was quite tough. But yes, happy to line up P2 for the Feature.”

Despite starting the Feature Race second, Lawson had to deal with a list of unwanted issues, as the slow pit stop affected his position in the race, allowing PREMA’s Dennis Hauger to gain the place.

However, the collision with Doohan left the Kiwi suffering from a puncture, which saw him losing hope of earning crucial points from the weekend.

The 20-year-old driver’s Sprint Race went well as he demonstrated Baku’s overtaking capabilities, carving his way through from P9 to the podium’s final step, proudly securing his fourth podium of the season.

Moreover, his rookie teammate Logan Sargeant managed to bring another podium for Carlin unexpectedly, as he seized the right opportunity when the long-time race leader Juri Vips hit the inside wall at the castle section, compensating Lawson’s result in the Sprint Race with even more points, as the team now sits fifth in the standings.

He added: “The Sprint Race was good, managed to go from 9th to 3rd, the pace was good. Then today, I had a decent start, was running 2nd, then we had a slow pit stop which put me out P7, I think, or P8.

“Then got torpedoed by Doohan from behind, gave me a puncture, and that was our race.

“Really frustrating because again, we had the pace, but it’s another weekend coming away with very few points.”

Heading to the seventh round of the season in Silverstone starting from 1-3 July, Lawson aims to catch up with Logan Sargeant in fourth from the drivers’ standings, with an outstanding 59 points. 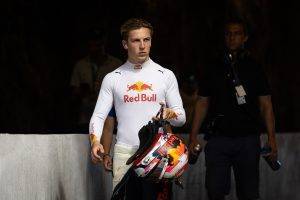