On his return to the series, Ralph Boschung lined up on the reverse grid pole without company for the start of the race. Jehan Daruvala was set to start alongside the Swiss driver but pulled to the side of the circuit on his lap to the grid with an issue.

Lawson dived into second place on the short run to La Source after venturing onto the grass while overtaking Théo Pourchaire and Richard Verschoor, while Boschung maintained his lead throughout the first lap.

However, Lawson took advantage of the slipstream down the Kemmel Straight going into Turn 5 and made his move around the outside to take the lead on the second lap of the race.

After looking like he had more pace for a couple of laps, Doohan overtook Verschoor for third position at the Les Combes chicane. Ahead of him, race leader Lawson complained about his rear tyres on only Lap 5 of the race, while drivers like Doohan looked much more confident further behind.

Once Doohan made his move, the race settled down without many drivers looking like they could close in on those in front, but that all changed on Lap 11.

While chasing down David Beckmann for eighth position, Logan Sargeant lost the rear of his car at Pouhon and crashed into the barriers.

The American driver looked to be a championship contender until a few rounds ago when his luck changed, and this latest DNF won’t help his outside chance of the title.

Sargeant’s crash resulted in the Safety Car being deployed, which subsequently saw multiple cars pit for soft tyres. This included Drugovich, who was previously running in sixth behind his championship rival, Pourchaire, but emerged well down the order but on fresh rubber.

Drugovich immediately started his charge towards the front of the field by overtaking Clément Novalak but was held up in an incident with Jüri Vips. Drugovich overtook Vips off the track and had to give the position back, but he would reclaim that place and two more by the same chicane one lap later.

At the front, Doohan got passed Boschung for second on the final lap of the race, while Lawson took the chequered flag by just under four seconds as Drugovich hunted down the podium positions.

MP Motorsport’s gamble to pit Drugovich under the Safety Car paid off as he finished the race in fourth, fractions of a second behind Boschung, with some incredible late-race moves to extend his championship lead. 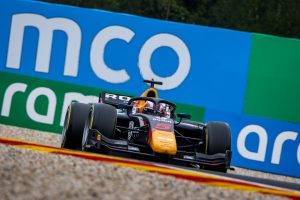