Fighting his way from sixth to second, Dan Ticktum acknowledged how difficult Baku is to master given FIA Formula’ 2’s limited track time.

Despite losing a place to ART’s Théo Pourchaire at the start, the Carlin driver charged his way from sixth to second in the first Sprint Race.

However, the Brit revealed that he only had done eight push laps prior to the race, which added to the challenge already posed by the Azerbaijani track.

“Very tough to be honest. We’ve come from Monaco, which as a street circuit is a lot of slow speed corners, here is like the opposite.

“I heard one of the F1 commentators say this track is like a combination of Monaco and Monza, which is quite a good way of describing it.”

The two-time Macau Grand Prix winner has shown himself to be well-suited to street circuits, having taken victory in the second Sprint Race in Monaco following Liam Lawson’s disqualification.

Nevertheless, Ticktum believes that his understand his car early on is vital, considering the issues highlighted by Formula 2’s often-disrupted single Practice session.

“Now having done 21 laps consecutively or 20 laps pushing, I just feel a lot more confident. It’s just a shame that we don’t get a little bit more track time before Quali.

“I shouldn’t be complaining because normally I’m quite good at just getting on it very quickly. I think if we look at every practice session in this season, when everyone’s done their first runs, I’m always in the top one-two.

“I’m just always good at getting on it quickly.”

Confidence and quick reactions proved to be paramount for the Williams Academy driver, who put in a series of daring late braking overtakes to achieve his third podium this season.

“The big braking zones are the biggest thing. You’re arriving so quickly, nearly 200mph at the end of the straight for us, more if we’ve got a slipstream.

“You’re just picking a definite braking point from that kind of speed, when you’re only a 100 metres away from the apex is pretty tough.”

Will Ticktum take his third Formula 2 victory this weekend around the streets of Baku? 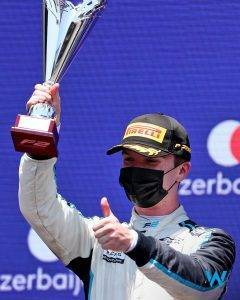