Carlin driver Logan Sargeant was fastest in practice for Round 7 of the FIA Formula 2 Championship at Silverstone.

The 21-year-old American Sargeant set a 1:40.902 late in the session moments before the session was halted and brought to an early conclusion with the second red flag of the session.

The session was stopped, first for Trident driver Calan Williams spinning off and hitting the barriers at Copse corner, before Marino Sato’s Virtuosi car stopped at Luffield corner with two minutes remaining in the session.

Brazilian Drugovich had earlier set a faster lap time which had been deleted for exceeding track limits.

Jack Doohan, who has impressed with his pace this season, was third fastest, ahead of Ayumu Iwasa and Drugovich’s closest championship challenger Théo Pourchaire.

There were no times set on the soft Pirelli tyre, which means pole position is still very much up for grabs in Friday afternoon’s session.

Story of the Session

Round 7 of the FIA Formula 2 championship kicked off in dry conditions, the threat of rain on the way but the grandstands were still packed with fans.

David Beckmann, filling in for the suspended Amaury Cordeel at Van Amersfoort Racing, started his session by running wide through Abbey and bouncing his car over a bump in the run off area.

Another driver to have an incident at Abbey corner was PREMA’s Dennis Hauger, losing the rear end and spinning multiple times in a breath-taking moment, which ruined his hard Pirelli tyres, meaning he ended the session slowest of all.

Several drivers were struggling to control the rear tyre temperatures, with Liam Lawson, Enzo Fittipaldi, and Jack Doohan all having slides on the exit of the ultra-fast Copse corner, resulting in the loss of their lap times.

With 20 minutes remaining, the first drops of rain began to fall, with most of the field retreating to the pit lane.

Calan Williams caused the first red flag, spinning off on entry to Copse corner and hitting the barrier, with 15 minutes remaining on the clock.

The Australian left his Trident uninjured but his mechanics were left with work to do ahead of Friday afternoon’s qualifying session.

After a delay of eight minutes, which allowed the sprinkling of rain to pass, cars were returned to the track, with everyone keen to get some final laps of data under their belts.

Marino Sato then stopped off the track at Luffield corner, bringing out a second red flag and ending the session prematurely.

It was a quiet session for Jüri Vips, who lost his Red Bull Junior Team position this week, he ended the session ninth fastest after setting a quick early lap in the session.

Pole position is sure to be fiercely contested with the top nine drivers in practice covered by less than half a second around a lap of roughly 100 seconds.

The 30-minute qualifying session begins at 17:25pm local time, with Doohan, Drugovich and Vips all hoping to be the first driver to score a third pole position of the season, with two championship points awarded to the pole position winner. 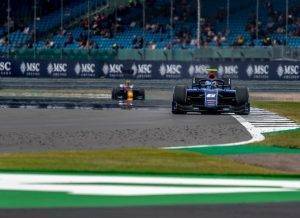