After back-to-back Formula 2 podiums in Mugello, Louis Delétraz is looking to match his success last weekend on his debut at the 24 Hours of Le Mans.

He is racing for the Swiss team Rebellion Racing in the #3 LMP1 car, alongside Frenchmen Nathanaël Berthon and Romain Dumas.

Speaking about taking part in one of the jewels in the Triple Crown of Motorsport, he said “It’s always been a dream to take part in this race.

“And to make my LMP1 debut with a Swiss team and to be fighting for a potential win, I really couldn’t be in a better position.”

The Swiss driver has to be one of the busiest drivers in motorsport at the moment, this race is his 11th racing event in 12 weeks.

Traditionally, the 24 Hours of Le Mans is held in June. However, due to the current global pandemic, the race was postponed to September.

As a result, the night-time portion of the race has been extended and will present a challenge to all the drivers on the grid.

However, the Charouz driver does not seem to be fazed by the additional time driving in the dark. He said:

“I’ve done a lot of laps in the dark during testing and I’m totally fine with that. It’s actually really exhilarating because things come at you much faster than they do in the daylight.”

Two Formula 2 alumni are also be taking part at Le Mans this weekend.

Firstly, former BWT Arden driver Tatiana Calderón is one of the two all-women teams on the grid for the first time since 1977.

She is competing alongside Formula 3 driver Sophia Floersch and 2019 W Series runner-up Beitske Visser in the #50 car for the Richard Mille Racing Team.

Competing against Calderón in the LMP2 class is 2019 Formula 2 Champion, Nyck De Vries.

He is part of Racing Team Nederland in the #29 car. De Vries is in an all-Dutch line up alongside Frits van Eerd and Giedo van der Garde.

Le Mans 24 is currently underway and we will be sure to keep you up to date at InsideF2.com 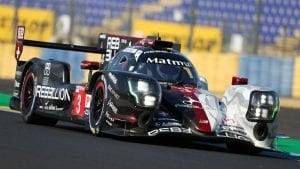