Luca Ghiotto’s Thoughts Ahead of the Racing in Spa

Luca Ghiotto’s Thoughts Ahead of the Racing in Spa

Luca Ghiotto’s thoughts ahead of the Racing in Spa:

Luca Ghiotto took time ahead of his weekend preparations to speak with InsideF2 and discuss the season so far and this weeks’ racing in Spa-Francorchamps.

As we know a lot has changed in 2020 but how have your preparations on a race weekend and on a race day changed with the new environment at the circuits?

“Well, it’s the same work. For me you don’t leave it as calmly as you used to. You don’t leave it like normal like you usual did. You don’t only focus on the racing you have to be safe with the virus, it’s a big part of the weekend. Everyone takes this very seriously and this of course not the same as it used to be. It’s good to be racing but you can’t go around freely and not be afraid of anything. That’s the main difference.”

Obviously one of these big changes is that you’re with a new team this year for 2020. You must been generally happy with the performance. Hitech are fourth in the teams’ championship at the moment as both you and Nikita have had wins and generally shown good pace from the very start of the season.

“Yeah of course, we have had some issues but I think that this is understandable as a rookie team. For lots of the team it’s their first year in Formula 2 so we are learning everything from scratch other than the engineering group. We are starting from zero on the car plus new things like pit stops.”

“We have had issues but they have done a great job. It’s all a learning curve for us”

When you weigh that up along with the results, both he and his teammate have performed well in what has been an unpredictable season in various ways.

We asked Luca about the form he has shown in Qualifying in particular.

“For sure it’s been good in qualifying, and Hungary in the wet. In Silverstone I struggled for sure but in Barcelona we looked ok. Unfortunately we had a mechanical issue in the pits so we worked through qualifying with a tough car. But through both races we did well to recover. Speed wise we have always been there if I look at the first three qualifying, it may actually have been the best qualifying run I have had in F2 after last year of course.”

The season has been somewhat unpredictable. Even more so than a usual Formula 2 year. We chatted about the grid, cars, changes and the general performance of the team and drivers.

“Many more teams are fighting for wins now, look at how MP Motorsport did last week in Barcelona. It was quite impressive to be honest.”

“Many people have asked me if this the strongest grid ever in Formula 2, it’s always hard to say that. What I can say is team wise for sure it’s the strongest. If you look at the grid at least eight out of the teams can win the race now and at least 12 drivers maybe.”

Looking ahead to this weekend we talked about Formula 2’s emotional return to Spa-Francorchamp’s this weekend. It will be a tough return for most following last year’s tragic loss despite the circuit being one that most drivers love.

“Well for sure it’s going to be really tough to go back there. Last year after what happened we all wanted to just leave the track and I think everyone in the paddock was feeling the loss and empty inside.”

“Spa is actually a track I always considered as my favourite. But when you have a favourite place and something bad happens there it changes how you feel in a way and it will never be the same again.”

“I’ve seen crashes happening all my life but it’s another thing when it happens in the same race and to someone you know.”

“Anthoine will come up in everyone’s mind for sure.”

Luca throughout his career had good results in Belgium with wins and podiums.

“Yeah, like I said it’s a track I really love and if you ask 100 drivers they will probably say the same. Despite what’s happened when the adrenaline kicks in and after those first few laps we remember that it’s still Spa and it’s a track that has given many happy moments.”

As always with Spa the weather plays a huge part of the outcome and the forecast this weekend looks like it could be famously changeable. How does that change your approach?

“Well it won’t change much to be honest, it’s always been crazy with the weather. It’s famous for not only the corners but also the weather so I’m always prepared for everything.”

Thanks for the time as always Luca and all the best this weekend in Spa. 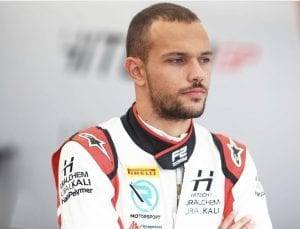