After a weekend of mixed fortunes at Silverstone, Christian Lundgaard is looking to capitalise on his second place in the Drivers’ Championship and bounce back in Barcelona.

The 70th Anniversary weekend saw Lundgaard take his third podium of the season in the Feature Race. Sadly, the Sprint Race was not so successful for the Dane; heavy blistering on his tyres saw him fall down the field and eventually his left-front tyre gave way forcing him to retire.

However, Lundgaard was optimistic about his chances this weekend whilst speaking to Rosanna Tennant on an Instagram Live on Thursday. “We have a good package in general” which he hopes will continue as he sees the races at Circuit de Barcelona-Catalunya being similar to Silverstone, with comparable tyre degradation and from looking at the forecasts, temperatures should be around the same.

The circuit this weekend seems to be a historically strong one for the 2017 Spanish F4 Champion. Last year, he finished second on his debut in Formula 3 and sixth in the second race. Despite this, he remains cautious; “I wouldn’t say we are the fastest car but we are there to fight.”

The action today in both Practice and the Qualifying sessions left him and the ART team with work to do during the race. Lundgaard could only manage sixteenth in what was a testing practice session for both ART drivers.

Qualifying, unfortunately, didn’t get much better as the Dane finished one second behind Pole in fourteenth place. The Feature Race will be one of late braking into Turn 1 we suspect.

This title challenge is looking incredibly promising for the young Dane, who has been a member of the Renault Sport Academy since 2017. Naturally, for any F2 driver especially one with the backing of an F1 team, their thoughts might be swayed more by the chance of a possible seat for next year or 2022. With Fernando Alonso’s return to F1 with Renault, Lundgaard is locked out of the opportunity to progress next year.

However, the driver seems to be relatively calm about his F1 prospects. After speaking about Alonso’s skill and potential that he will bring to the team, he said: “At the moment I wouldn’t say I’m too focused on the future, because obviously if I focus too much now on F1, F2 is not going to succeed.”

He’ll be hoping that his past fortune continues to favour him this weekend and he’ll be able to keep up with his fellow title challengers.

Can Lundgaard storm through the grid and challenge for the win in the Feature Race? Let us know @F2inside on Twitter 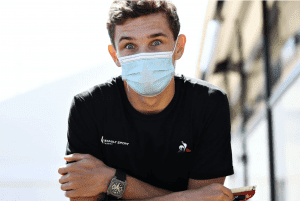