Lundgaard performed brilliantly during the race setting very consistent lap times. He finished ahead of some esteemed company including Pato O’Ward and Indy 500 winner Helio Castroneves.

The Dane finished just eight seconds behind Colton Herta who finished in P4 for Andretti Autosport.

The Rahal driver switched to IndyCar full time for 2022 after a strong debut at Indianapolis in 2021.

The 20-year-old struggled initially in first practice on the 1.800 mile circuit finishing in P25 before improving in second practice.

Lundgaard stepped up on the Saturday afternoon and qualified in P15 ahead of one of his team mates Jack Harvey. A very impressive performance during his first visit to St. Pete.

He set a best lap time of a 1:00.027 just three tenths slower than his team mate Rahal.

The Dane said after qualifying: “It was a good day throughout. I think the morning session went pretty well, we made good improvements since yesterday in practice two this morning.

“We had a slight issue on the car just before qualifying and managed to sort it out and got the car out there”.

“We performed on the Firestone primary blacks but didn’t quite get the performance out of the reds that we were hoping for but considering the rush we were in just before qualifying, I am pretty satisfied with the result”.

Lundgaard completed 19 laps in the warm up and set a 1:02.2451 which was a mere three tenths slower than Mexican superstar Arrow McLaren SP driver Pato O’Ward.

He started the race on the harder compound primary Firestone tyres looking to benefit from a long first stint.

The majority of the field opted for the softer alternate tyres which are less durable than in previous years.

Lundgaard lost places at the start dropping down to P20 as Scott McLaughlin led the field from pole position ahead of Colton Herta.

The Dane comfortably sat within a second of the much more experienced Sato. O’Ward and Josef Newgarden made an early pit stop for alternate tyres from the front of the field.

This allowed Lundgaard to move up to P10 just ahead of Conor Daly and Jimmie Johnson as McLaughlin continued to lead.

Rookie driver David Malukas crashed at Turn 4 on Lap 26 bringing out the Safety Car during the 100 lap event.

The Dane made an excellent Safety Car restart moving up into P18 finally passing Sato on Lap 34.

Lundgaard also got past Romain Grosjean making use of his alternate Firestone tyres battling in the thick of the midfield.

He pulled off a fantastic move at Turn 1 sweeping around the outside of the Frenchman.

The 20-year-old looked supremely strong at the midpoint of the race keeping Grosjean at arms length at the physically demanding St. Pete.

Lundgaard pitted on Lap 66 on the same lap as Grosjean and his English team mate Harvey.

The Dane rejoined the race in P15 critically getting passed by the former F1 driver as the race neared its conclusion.

With 30 laps to go he benefitted from other drivers making pit stops and moved up into tenth place.

Lundgaard continue to drive very consistently hassling Grosjean for P9 on the streets of St. Pete before making a mistake with a few laps to go.

The 20-year-old subsequently dropped down the order behind Marcus Ericsson and Sato to P11.

IndyCar will now head to the Texas Motor Speedway for the Xpel 375 on March 20th. The Xpel 375 will become the first Oval event of the 2022 season as Scott Dixon and O’Ward look to repeat their success from 2021. 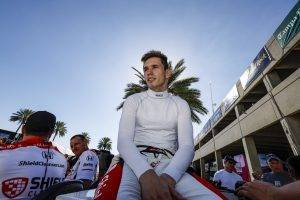