Christian Lundgaard put himself in Formula 2 title contention with a dominant win in the Sprint Race at Mugello.

After an unlucky Saturday, Lundgaard got a stellar getaway to take the lead and didn’t look back.

The Danish driver took maximum points available with the win and fastest lap to take third in the Formula 2 championship.

Reverse pole-sitter Artem Markelov and Vips got bogged down at lights out, allowing the ART of Lundgaard to surge into the lead.

The start saw a strong getaway for Delétraz, with the Charouz driver storming up to third from sixth.

After his difficult start, Vips was looking to recover to the podium, however on Lap 7 a tap between him and Markelov sent him wide.

Luckily, he managed to continue and despite the HWA driver retaking the position, Vips made the move stick a couple of laps later.

As a result, Markelov is forced to pit due to damage on Lap 11 after slight contact with Ghiotto.

Lap 15 saw disaster strike as the two Hitechs collided, with Mazepin locking up into the apex of Turn 1 and knocking Ghiotto into the gravel trap.

Ghiotto was forced to retire and Mazepin had to put for checks, dropping down to 17th.

Callum Ilott and GuanyuZhou both had strong recovery drives into the points, with the Chinese driver passing his teammate and making up 15 places during the race.

Lungaard’s unassailable 14 second lead saw him take the win with Delétraz in second and Vips completing the podium in third. Schumacher holds on to the championship lead in fourth followed by the UNI-Virtuosi’s of Zhou and Ilott.

Daruvala held on to seventh whilst Sato put in a strong performance to take his first points finish of the season in eighth. 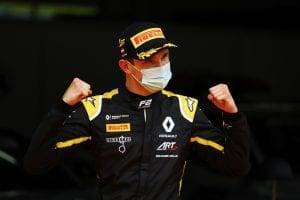