The Feature Race at Monza saw Christian Lundgaard return to the podium for the first time since Round 5 at Silverstone.

Starting fourth on the grid, he benefited from Yuki Tsunoda’s difficulties at the start to overtake him on the inside of Turn 1, whilst eventual race winner Mick Schumacher overtook both drivers at the same corner.

The early stint of the race saw him engage in a dicey three-way battle with Tsunoda and Luca Ghiotto for third place. However, after pitting on Lap 8, the Danish driver was able to undercut both drivers and assume second place once the drivers on the alternative strategy stopped. This was as a consequence of pole-sitter Callum Ilott falling back due stalling in his pit box several laps earlier.

The slightly older tyres meant he was not able to keep up with the pace of Schumacher and was caught by the Hitech of Luca Ghiotto, who squeezed past him with two laps to go.

Speaking about the result, the ART driver said: “I think we should be happy with third today. I don’t think we had the pace to fight for the win. Obviously, starting fourth helped. I think in the first stint I was the first driver to box, I’m not too sure, but one of the first ones at least.

“We paid that price towards the end, with Luca coming past like a rocket and feeling like he had new softs on. But yeah, I think we need to be happy with scoring decent points today after scoring two points in two race weekends. I’m happy to be where I am today.”

This podium, the fourth of his rookie campaign, has seen Lundgaard jump up to fifth in the drivers’ championship. He currently sits 30 points behind championship leader Robert Shwartzman.

When asked about his chance of taking the 2020 Formula 2 title, he said: “There is the rest of this weekend and then four race weekends more. The title isn’t done yet, but I think we need three very good race weekends to be able to really fight for it.”

Wise words from the Renault Sport Academy driver could prove to be fortuitous after the Sprint Race tomorrow. He’ll be hoping that he can convert sixth on the reverse grid to another podium appearance and close the gap to Yuki Tsunoda in fourth. 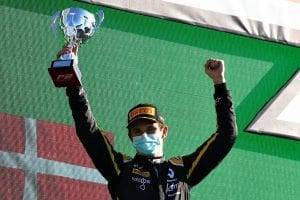