After almost a month of waiting we finally saw the Formula 2 cars back on track today for the first of a three day In-Season Test in Barcelona, with Christian Lundgaard setting the fastest times in both the morning and afternoon sessions.

The first hour of testing was interrupted by two red flags, the first being Jehan Daruvala in Sector 1. Not long after the restart, Oscar Piastri was off the road in the same sector. Both managed to get back out on track to set lap times.

Christian Lundgaard topped the timesheets in the morning session with 1:29.594 and set the pace for the rest of the session.

Fifth place of the morning session went to MP Motorsport’s Lirim Zendeli, who was just ahead of the current driver’s championship leader Guanyu Zhou for UNI-Virtuosi.

PREMA’s Oscar Piastri who brought out a red flag earlier in the session did well in recovering to finish in ninth place.

MP Motorsport’s Richard Verschoor, who is yet to secure his place on the grid for the second round in Monaco next month, finished off the Top 10.

The session was halted momentarily with 35 minutes to go when Gianluca Petecof stopped on track as all the drivers pushed to find the limits of the car and track.

ART and MP Motorsport wasted no time getting back out on track for the afternoon session, with both teams heading out first to set times.

However, their fun was short lived when Zendeli stopped in Sector 2 bringing out a red flag in the first 10 minutes of the session.

When we resumed it was Verschoor that help top position with a time of 1:30.165.

That was until the final 40 minutes when Lundgaard regained his place at the top of the timesheet yet again with a 1:29.827.

Charouz Racing’s David Beckmann closed the day off in eighth place, while Vips and Drugovich finished off the Top 10 in ninth and tenth place respectively.

The session was interrupted once again when Nissany stopped in Sector 2, with under two hours left to go.

Times were slightly slower than those seen in the morning session, as teams appeared to be focusing on race simulations.

Championship favourites Robert Schwartzman and Dan Tictum did not have the best start to testing with neither driver able to make it out of the Top 10 in the morning or afternoon.

Teams and drivers will be back on track for Day 2 of Testing tomorrow morning at 9 am (local time). 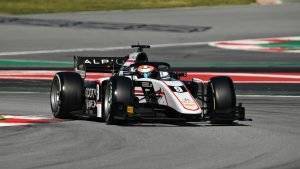