FIA Formula 2 ART Grand Prix driver, Christian Lundgaard, stormed through the field to finish third on the podium, in the first Monza Sprint Race of the weekend.

Qualifying on the grid in P19 the Dane finished third with a blistering pace, and a little good fortune.

“I stayed out of trouble and kept my nose clean for the race. I did some ‘nice moves’.

The two PREMAS were squeezing each other, which gave me an opportunity, and I knew Robert [Shwartzman] had a penalty, so I didn’t need to take any chances.”

“I was extremely lucky with Safety Cars as they created opportunities. It becomes a DRS train behind them, which helped massively today.

“We had a Virtual Safety Car and full Safety Car within one push lap, and we had 14 laps to go, then there was a second Safety Car and I was thinking, ‘where did the other seven laps go? Because I didn’t remember them.”

“The key was staying out of trouble. Staying clean I gained seven/eight positions.”

Lundgaard is confident on the two races ahead:

“The car’s strong and was good today and there’s more to find. I’m in a good position for Race 2, but we need to do it in Race 3 as well.

“I have proved it’s possible but can we repeat it? We might be able to stay in the pack. But for Race 3 it might be difficult to repeat what we did today.”

Unsure of where his future lies, the Danish driver is leaving his options open:

Having enjoyed two podiums in Bahrain and Silverstone already this season, could Lundgaard’s fortunes be turning around as Formula 2 heads into the second half of the season? 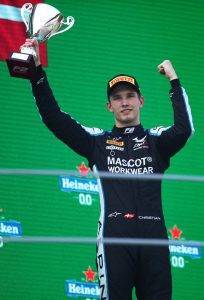