Marcos Flack will join Fortec Motorsport in British F4 this weekend during the penultimate round of the season at Silverstone.

The Australian is making his return to the series after a full campaign with Argenti in 2021, which yielded three podium finishes in his debut single seater season.

Flack will partner 16-year-old rookie James Higgins at Silverstone as the British driver and the Fortec team bid to gather more experience ahead of a full British F4 season next year.

Fortec’s new recruit is delighted to be returning to British F4 and said: “I’m looking forward to being back in ROKiT British F4, and to partner up with Fortec Motorsport.”

The driver from Brisbane has competed in a plethora of championships in 2022 including GB3 where Flack took a breakthrough victory at Silverstone.

The Australian has also driven in the Italian, German and Spanish F4 series plus in the Indy Pro 2000 Series at Gateway and Portland.

He said: “It’s a championship that I learnt a lot in last season, and I’ve got experience with the new Gen-2 car from racing in Italy and Germany this year.

“Fortec are a great team, and I’ve always run well at Silverstone, so the ingredients are there for us to have a good weekend.”

Oliver Dutton, the Fortec Team Manager explained that Flack joining the team allows for the Daventry-based squad to hit the ground running and compete at the front at Silverstone.

“Marcos is a talented driver, and already a proven quantity at both this level, and the level above,” says Dutton. “So, we’ve no concerns he will be able to extract the most from the car.

“It’s also important for James’ development to have an experienced driver in alongside him, and Marcos’ experience will be equally valuable to our team at the track as we begin our programme for next year.

“We’re looking forward to working with him, and to be back out racing in F4 this weekend.” 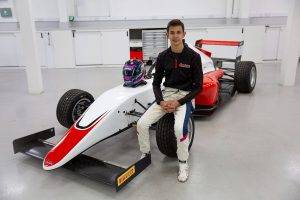