Marcus Armstrong and the heartbreak from Monaco

Marcus Armstrong and the heartbreak from Monaco

Marcus Armstrong aims to be more assertive in Baku after facing a challenging weekend in the FIA Formula 2 second race of the season.

The two last races in Monaco were a nightmare for the New Zealander, with two DNF’s.

He managed to take reverse grid pole for Sprint Race 2 after having a battle with Carlin’s Jehan Daruvaala to secure the tenth position.

Unfortunately, for the Ferrari Academy Driver, a problem occurred on his way to the starting grid as he started from the pit lane.

Just three laps after the lights went out, Marcus Armstrong crashed into the wall, and the Feature Race saw the same result with Jüri Vips dragging him into the wall in lap 31.

Armstrong explained: “It was great to be competing in Monaco, but we didn’t get the results we wanted.”

“In Sprint Race 1, we worked hard to take P10, and I’m really happy with the last-lap overtake to secure the position.

“Unfortunately, I stalled on the warm-up lap for Sprint Race 2, and that cost us the chance of a podium.”

“In the last race, we had a good strategy and excellent speed. I was going for an overtake on another car, but we made contact, and I ended up in the wall.”

Leaving heartbreak from Monaco behind, Armstrong intends to pull out a solid performance in Baku as he hopes to learn from the experience.

“Despite that, we still had great pace, and I hope to carry that to the next round in Baku.”

Managing Director François Sicard talked through Marcus’ performances in Monaco as he clinched 10th in the Sprint Race to start the race in pole position.

“It was a pretty tough weekend for Marcus. He had a difficult qualifying before an absolutely amazing comeback, clinching 10th in Sprint Race 1 and reverse grid pole. “

“In the Feature Race, he came through the field strongly again; he was set for points but had contact with another driver and ended in the wall. It’s a shame because his pace was good like it was in Bahrain.”

With the highs and lows from their weekend in Monaco, the team will be focusing on the two drivers’ performances before heading to Baku next week.

“Both drivers will be at the factory in Le Mans this week as we prepare for Baku, so we will be working hard to score strong points.” said Sicard. 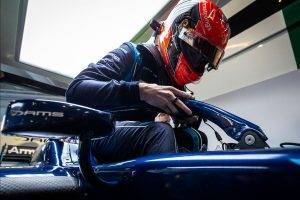