Formula 3 Champion, Victor Martins, has exclusively told insideF2 that he is confident in winning the FIA Formula 2 title next season if he’s given the opportunity to drive with the ART team.

“My goal will be to win directly in the first year, but we will need to see how it is. It will be a long season , 14 rounds, so five more than the F3 season. It will be longer, and different tracks also, so there will be things to learn and yet to see. But I’m quite confident.”

Martins has every right to feel this sure of himself following his triumphant season in Formula 3.

“It felt for sure great. It has been almost two months. It was a really nice feeling, something I was waiting for, and a goal I wanted to achieve with the ART team.”

The final F3 weekend wasn’t without drama. Martins recovered a single point in the Sprint Race after finding the gravel on the first lap. And the Feature Race ended with a Red Flag, and track limits time penalties, that saw the ART driver secure enough points to win the Championship title.

“It felt great how I got it in Monza. It was so intense waiting until the end, but we finally did it, and now I can focus on the next step; Which was first the test here, and then for next season.”

Martins is yet to confirm his seat for 2023, but he’s just completed the Formula 2 post-season test, with ART, at the Yas Marina Circuit.

“I announced that I was doing the three days with ART and I think a lot of people thought that it was confirmed for 2023, but it is not [yet].

“I would say it’s about how these days were going to be and how I would adapt to the car, and how I was going to work with the team also. Let’s hope it will be signed and confirmed quite soon. But I know I put myself in a good position and a good place to get everything that I want for next year.”

Martins finished every session in the top 10, bar the afternoon session on Day Two. However, the Frenchman topped the timing sheets on the morning of Day Three, which demonstrates how well he’s adapted to the the F2 car, and is working in sync with ART’s F2 crew.

“I had a different race engineer for the test [than in F3 last year] – but I knew these guys since I won the Formula Renault title with ART already, and I’ve met a lot of people at the workshop.

“With the car, I’d say it’s only testing. But since the first push, I was like, ‘I feel good with this car’, and I understand it. I want to be with the team. I have been Champion with ART and I want to continue this relationship.

“As a rookie season you always want to do everything right from the beginning – you know, impress, show your potential. But first, I’ll try to focus on the things I needed to learn, on the plans, strategy, pit stops, practice starts, all those things, especially pit stops; doing two stints on different compounds – Knowing them and knowing how they are on the tyre deg. Just to know and experience that first, and then know you set your goal regarding your performance and experience.”

ART have enjoyed plenty of GP2/Formula 2 success, with Formula One drivers, Lewis Hamilton, George Russell, Nico Hülkenberg and Nyck de Vries. Therefore, Martins has every right to feel like he could win a Championship with the French team in his rookie year, after a favourable test in Abu Dhabi.

“From what I saw, I’m feeling great.” 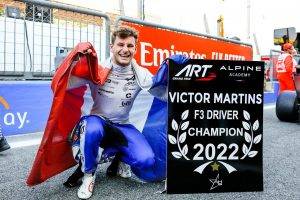