Match Point: How Felipe Drugovich can seal the Formula 2 title at Zandvoort

Match Point: How Felipe Drugovich can seal the Formula 2 title at Zandvoort

FIA Formula 2’s had it’s fair share of champions: George Russell, Mick Schumacher and Oscar Piastri to name just three. But this weekend, a new name could be added to the list of champions, and that’s Felipe Drugovich.

The Brazilian came into this weekend 43 points ahead of rival Théo Pourchaire, but added 2 more points to his tally with a stunning pole position, to put further distance between the pair. And with Pourchaire only managing 16th on both grids, Drugovich comes into the races knowing he has the opportunity to secure the championship.

With 39 points coming from a single race weekend, Drugovich is aiming to leave Zandvoort 79 points clear of Pourchaire – 2 race weekends’ worth of points, plus an extra point to avoid a tie. This will mean that even if Pourchaire wins both races in Monza & Abu Dhabi, claims all 4 fastest laps, and takes both pole positions, he will not be able to catch Drugovich.

How can Drugovich finish the weekend 79 points clear? In theory, it is quite easy – earning 34 points across the Sprint and Feature Races. The only way to achieve this is simple – 2nd place or above in the Sprint Race, a win in the Feature Race, and at least one Fastest Lap. However, this works off the assumption that Pourchaire will not score any points – an assumption that should not necessarily be made, given the Frenchman’s carved through the field several times already this year.

In the chance that Drugovich leaves the weekend 78 points clear, the title mathematically cannot be his until Monza – due to the countback rule of Formula 2, where in the instance of a tie, the number of victories decides who finishes ahead. He would theoretically be champion, however, there would not be 100% certainty of the matter, so would have to wait another weekend to be crowned.

It would be a special moment to see MP Motorsport’s most successful driver secure his Formula 2 title at the team’s home race, however, it may be a tough feat to achieve. But with Drugovich becoming the only driver to win both races on a weekend in the Formula 2 era, there’s a chance the title could well go to the boy from Brazil this weekend. 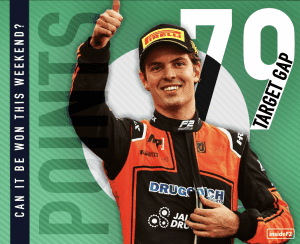